Beers that are popular but hyper-localized

I grew up near Baltimore, Maryland (USA), and spent a few years living in the city. One very popular beer in Baltimore is National Bohemian ("Natty Boh" in local parlance). You can see the beer's one-eyed mascot, Mr. Boh, all over the city. Apparently more than half a million cases of Natty Boh are sold in the city of Baltimore each year, which seems pretty high for a city with population 620,000. 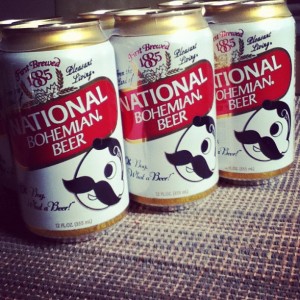 One thing that I've found very odd is that outside of the small state of Maryland, you really can't find the beer at all, and 90% of the beer's sales are within the city of Baltimore. Thus, while the beer is reasonably popular, the interest is hyper-localized to a single city.

Are there other examples of beers that have high sales volume but are hyper-localized, or are Baltimore and Natty Boh unique in this respect? Is there some sort of economic or marketing phenomenon behind hyper-localized popularity of a high-volume beer?

Most of the long running local brands have been acquired by the conglomerates and continue to operate and distribute in a limited range, as there is little to no financial motive to further the distribution of these brands.

The kings beer sold in the goan state of India. Super popular, but only available within the state. Granted, it's a state vs a city but its a really small state.

You will have to ask the brewery if they even try to advertise or ship their product anywhere outside of Maryland. If the brewery is limiting it's availability (for whatever reason) then that would be your answer.

Great Lakes Brewing Company located in Cleveland, OH has a lot of great beers! To be honest I don't leave the state too often, but I believe it's an Ohio thing.

There is also another popular brewing company in Akron, Ohio called Thirsty Dog Brewing Company, which also makes a lot of great beers!

Like I said, I don't leave my bubble very often, so I can't tell you how hyper-localized these are.

Same here in Germany, in the 70s and 80s all the local breweries were bought by bigger companies or closed down. But than more and more small breweries got founded with delicious beers, hand crafted and very small amounts and miost of them (locally) very popular. Others such as Rothaus in black forrest simply reached their capacity because they decided not to expand. Rothuas only has 7 natural water sources and therefore cannot produce any more beer based on those.

4
Are Birra Moretti Beers from the series “Le regionali” still available?
4
Which Brazilian beers are found outside Brazil?