Hops are the flowers of the hop plant Humulus lupulus. They are used primarily as a flavoring and stability agent in beer, to which they impart bitter, zesty, or citric flavours.

Hops are the flowers (also called seed cones or strobiles) of the hop plant Humulus lupulus.2 They are used primarily as a bittering, flavouring and stability agent in beer, to which they, beyond bitterness, impart floral, fruity or citrusy flavours and aroma;3 though they are also used for various purposes in other beverages and herbal medicine. The hop plant is a vigorous, climbing, herbaceous perennial, usually trained to grow up strings in a field called a hopfield, hop garden (nomenclature in the South of England), or hop yard (in the West Country and U.S.) when grown commercially. Many different varieties of hops are grown by farmers around the world, with different types used for particular styles of beer. 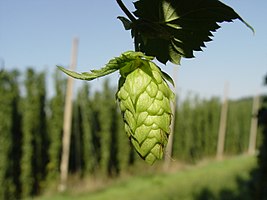 Hop flower in a hop yard in the Hallertau, Germany

What is a citra hop, and how does it differ from other hops?

What uses do hops have outside of brewing?

Is there a full list of hops all around the world?

What exactly is this process of adding hops called?