Popsicles bring home the idea of warmer days and entertainment amongst friends. During our self isolation moments we want to make the best of the moment of those fun days (like being on a beach), but in reality staying home because of the Covid-19 situation.

Does anyone have any recommendations to make on alcoholic popsicles? Is there a particular mould that works best for keeping it colder longer? Any ideas are welcome.

Would appropriate a recipe in any answers (even via a link).

Any personal experiences would make a recommendation so much more meaningful!

A few of out of the box ideas if you don't want to deal with the hassle of alcohol being a bit finicky when freezing or you don't have molds. I've done all of these myself.

1) Pour a glass of Prosecco and dip any store-bought fruity popsicle in as the "ice" - makes for a good Bellini!

2) If you do have a mold, a fun one from the college days is soaking gummy bears in vodka, then freezing them in a mold with something like ginger ale. It's very sweet though! The same recipe was on this list from Country Living: 18 Boozy Popsicles to Enjoy This Summer.

3) If you have a snow cone maker or a way to obtain shaved ice/drive through a sonic...pick your favorite "slush" or "snow cone" and top with alcohol. For example, I love a good coconut snow cone with some sweet half & half and a shot of light rum on top.

I honestly have never made this one. Some time back a friend of mine made these for a backyard barbecue. They were quite delicious. However not being quite as hard as ice, we had to down it relatively quick. The ones in the picture were similar to my friend’s popsicles. 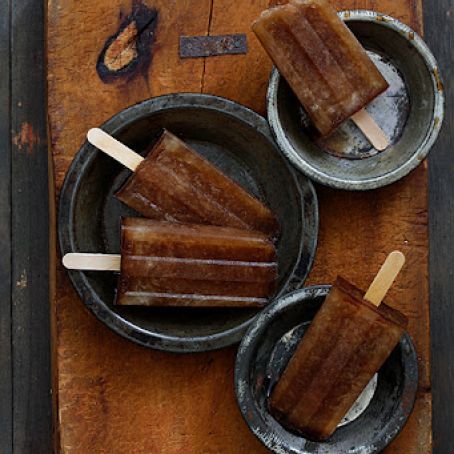 My friend told me that using Diet Coke worked better than the regular coke.

Wanting to make some for a nice form of distraction, I wanted to find out if a particular shape of popsicle would stay harder longer. Here is what I found out.

Slightly flat Coke will produce a popsicle that stays frozen longer. To quickly and manually flatten out the carbonation, empty out enough Coke from a 2-liter bottle to leave a 3-inch space from top of bottle to top of coke. Place cap back on and shake vigorously for 10 seconds. Set aside to leave bubbles to subside. - Dirty Pirate Popsicle

The following is taken from Quora:

Do Ice shapes matter? If so, which shape of Ice keeps my drink colder the longest?

The larger the surface area, the faster the ice will melt. A cube of ice will last longer than a flat slab of ice of the same mass. The shape with the smallest surface area per volume is a sphere.

A spherical piece of ice would melt slower than any other shape. There are moulds available to make spherical ice cubes, and they are favoured by some people who use them in alcoholic drinks because they take longer to water down the beverage.

That is right round popsicle moulds work best for any alcoholic popsicles!

Not the answer you're looking for? Browse other questions tagged taste recommendations ingredients alcohol recipes or ask your own question.