I have decided to drink only beer as a New Year’s resolution, however one of my friends said that beer is more hazardous than whiskey.

Can anyone help me with this? What should I drink ?

There is no one perspective that is a definite answer to this question because there are many factors that must be taken into account.

How to drink moderately and how much alcohol in a drink is considered to be moderate?

Most people consider drinking by consuming a drink or two socially or in private. Drinking too much in some circumstances can lead to another alcohol poisoning.

What is Moderate Alcohol Use?

Guidelines for moderate drinking have been set by the US Department of Health and Human Services and the World Health Organization.

A Standard Drink - The Definition of a Drink

A standard drink is 14g of pure alcohol according to the US Department of Health and Human Services. The World Health Organization defines a drink as 10g of pure alcohol.

Each milliliter of pure alcohol weighs 0.79 grams. Therefore, you can calculate the alcohol content of a drink with the following formula: 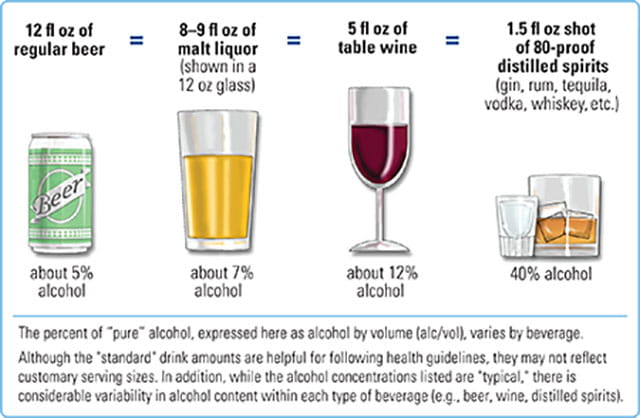 Now for the question of weight gain! Which drinks contain more calories and thus can make it more readily possible to get one fatter more quickly. The amount of carbohydrates must also be taken into account.

Alcohol can either give you a beer belly or help you uncover your abs. After all, while one Archives of Internal Medicine study shows that people who put back one or two drinks a day are less likely to gain weight, research in The American Journal of Clinical Nutrition shows that men consume an extra 433 calories on days they have just a couple of drinks.

While lowered inhibitions and drink-fueled munchies have something to do with it, 61 percent of the caloric increase comes from the alcohol itself. So, if you're trying to lose weight while still enjoying the occasional drink, you'd better be wise about which drinks you choose. Here are the best and worst booze you can order.

Red or white, you can expect to consume roughly 100 to 120 calories per glass. (That's assuming, however, that you're drinking a standardized 5-ounce glass. Research from Iowa State and Cornell shows that people tend to over-pour by 12 percent.)

However, there are some considerations to make when picking grapes: White wine typically contains fewer carbohydrates than does red wine, which makes a small difference in terms of calories, says Caroline Cederquist, M.D., author of The MD Factor and creator of bistroMD. Meanwhile, red wine is richer in antioxidants, and a 2014 study in The Journal of Nutritional Biochemistry, red wine's ellargic acids delay the growth of fat cells while slowing the development of new ones.

“A fortified wine with higher alcohol content and infused spices and herbs, vermouth is a calorie saver if you have it by itself—as it's commonly served in Europe," says Georgie Fear, R.D., author ofLean Habits for Lifelong Weight Loss. A 1.5-ounce serving contains a mere 64 calories, and typically contains about 15 to 18 percent alcohol, she says. Plus, research out of Budapest shows that it's jam-packed with polyphenol compounds, which may promote healthy weight loss.

Still, remember that if you mix it into a Manhattan or martini, you're probably going to be consuming far more calories and sugar, Fear says.

When it comes to getting the most alcohol for the fewest calories, shots and straight booze on the rocks are the way to go. "There isn't much of a difference between 80-proof hard liquors," Cederquist says. "They all have around the same amount of calories and carbohydrates." And as calories increase along with alcohol content, the difference isn't huge. For instance, a shot of 86-proof whiskey contains 105 calories and a shot of 80-proof vodka contains 97.

However, you also need to keep in mind that the sweeter the liquor, the more calories it typically contains, she says. "If you're looking for a lower calorie alternative, avoid the flavored vodkas and spiced rums and go for the original or 'plain' option offered," she says. "If you are looking for a flavor boost, try low-calorie mixers like a flavored seltzer or fresh squeezed lemon or lime. This will provide the taste without the calories."

With fewer calories and carbs, these are the best brewskis for weight loss, Cederquist says. Many light beers contain 90 to 100 calories per 12 ounces, while extra-light beers pack about 55 to 65.

However, just don't use that as an excuse to have more beers than you typically would, or you'll undo all benefits. Hey, they generally pack less alcohol, right? Well, yeah, but they actually tend to have a higher percentage of their calories coming from alcohol compared to standard brews. Budweiser Select 55 for example derives 88.2 percent of its calories from alcohol, compared to Bud Light at 74.1 percent, and regular Budweiser at 66.9 percent calories, Fear says.

"Margaritas and Long Island Iced Teas can set you back more calories than a large order of McDonald's French Fries," Fear says. Even worse, calories from sugar-laden drinks come as a sneak attack. When you drink a marg, your body is so overwhelmed with the alcohol content that your body doesn't properly metabolize the sugar. Instead, it stores the sweet stuff as fat.

There is never a good excuse to drink these and other sugar-filled cocktails especially if you are trying to lose weight or not develop diabetes, she says. Now, if you've got a skilled mixologist behind your bar, you're probably calorically safe ordering a cocktail. After all, he'd never serve up one of these artless offenses.

If one deals with a gluten sensitivity, the only options is to avoid drinks with no gluten in them.

This article explains it quite nicely: Gluten Free Beer, Alcohol and Wine

The end result is that all forms of drinking alcohol must be done in moderation. There is no one drink that is less hazardous to one’s health. Just keep it to one or two drinks a day.

If weight loss is on your mind, I would recommend a shot or two of straight (neat) liquor(s) or a light beer. Just because it is a light beer that should not be a license to drink as much as one wants, since moderation is always the key factor here.

Another perspective. Alcoholic drinks contain ethanol and methanol Ethanol is the alcohol we want because it has the intoxicating effect we want without the detrimental effects of methanol that causes hangovers and blindness. Cheaper drinks contain more bad and less good. Particulates and dissolved solids also cause hangovers. So the more expensive and clearer the liquid the healthier it is. Providing the amount drunk is equivalent. Flushing with a pint or two of water before bed also mitigates the damage. In conclusion vodka in the same alcohol concentration as the others would be the least harmful. Ie vodka watered down to the same percentage alcohol as the beer would do less harm.

Not the answer you're looking for? Browse other questions tagged recommendations health drinking or ask your own question.

6
Does beer really help to improve muscles?
16
Is beer healthy if drunk in moderation?
9
What happens if I drink buttermilk after 3-5 drinks rum or whiskey (60ml each)?
5
An alternative to Vodka to pair with caviar
8
Can one put on weight by drinking beer?
6
Can drinking 45ml of spirit (40%) per day affect your health?
2
What causes my stuffy nose after drinking alcohol?
3
Recommendations for a pandemic coronavirus drink?