I have noticed a number of gluten free beers pop up on the shelf of my local beer store over the past few years. Are these drinkable? And does anyone have any recommendations of any to try?

Omission isn't too bad. My wife is gluten free and she drinks this from time to time. I've tried it and is better (IMO) then most other GF beers.

And from their FAQ

In 2013, Mass Spec research was conducted by an independent lab which validated that Omission Lager and Pale Ale are devoid of known barley toxic epitopes, the specific peptide sequences and reactive sites in gluten molecules that cause reactions in the human small intestine. These same beers were tested using the R5 Competitive ELISA and were found to lack any measureable gluten content. A growing body of peer reviewed scientific literature supports that our process is effective in breaking up and detoxifying gluten peptides.

Another option is Ghostfish, which is a pretty good IPA

Just to add to this topic, I think it's important that the correct terminology is used since the author asked for "gluten free" beer suggestions.

In the beer world, "gluten free" can only be used if the ingredients used to brew the beer do not contain gluten. Sorghum appears to be the most popular ingredient for making GF beers, but there are a number of other options including buckwheat, millet, honey, even chestnuts. Redbridge is an example of a GF beer. IMO, sorghum gives off a cider-y flavor so I have not really enjoyed the sorghum-based beers. Only gluten free beers that I've enjoyed are made by a Canada-based brewery called Glutenberg. Their APA and IPA are fantastic. Unfortunately, they don't currently distribute everywhere so I have to drive to a neighboring state to buy it.

There are also beers that are brewed with traditional ingredients that contain gluten, but an enzyme called Brewer's Clarex is added to primary fermentation. Clarex was originally used to clear beer and prevent chill haze, but it was discovered it also breaks down gluten such that, when tested with traditional gluten tests (ELISA), the beer is well within the "gluten free" threshold (<20 ppm). These beers cannot be called "gluten free", though, rather they can only be labeled "crafted to remove gluten". Omission brews "gluten reduced" beer (which are very good IMO), but apparently Yards also uses Clarex in some of their beers (even though they don't label their beer as "crafted to reduce gluten").

I've tried several different Gluten Free beers in the past few years. So far, the only brand that I've tasted that resembles normal beer almost 100%, is Omission Lager and Pale Ale. Their IPA doesn't really do it for me, but it's still the closest Gluten Free IPA I've tasted.

Here is a review for Estrella Damm Daura

It is one of, if not the first gluten free beers to be made. This is one of my favorites.

I recently tried Schnitzer Brau Gluten Free. It tasted great so much so that if I was offered without knowing it was gluten free I wouldn't notice the difference. I think I'm ok with gluten but I'm cutting down. Either way I would definitely go for another one.

I'm not sure if you are looking for STRICTLY beer but, what about hard cider? I am pretty sure all ciders are GF. I personally like Original Sin and Ace Cider's.

Tweason'ale by Dogfish Head is a unique fruit and vegetable beer that is available in many places in the States.

We like Omission Pale Ale, but apparently anything by Omission is quite good.

Good luck and let us know what you find!

Answered by: the Gastrograph Team

If you're not too sensitive, there is Wicked Weed Gluten FREEk, its brewed with the brewers clarex, my wife has celiacs and she does not get a reaction from drinking it. It is the best "Gluten Reduced" beer out there! Alpine brewing company is also brewing some beers with the clarex but have not gotten a chance to try them. if anyone from CA wants to set up a trade i would be more than happy to!

I'm surprised no one has mentioned Glutenberg, which I have heard very good things about, although I can't find it in my area. According to their website, they have won several awards at the "World Beer Cup".

My girlfriend is coeliac and we live in Belgium - Brunehaut is very good. They have four different "bio" beers that are all gluten free. They cost like 1.5 EUR in the supermarket and they taste just like "normal" beer since they have a unique process to "deglutenize" beer.

They list 2 distributors in the US: C2 Imports and Waterloo Beverages.

We were in NYC on vacation and got some gluten free "beer" which was made form rice or something else and it was god awful.

There's something on Wikipedia about Corona having such low levels of gluten that it's on par with actual gluten free beer.

My friends from DC recommended me Omission, it also tastes good.

I've tried New Planet but I didn't liked it.

I am able to consume gluten with no ill effect, but have drunk Wold Top "against the grain" a couple of times, just because it's a decent beer :) different, but not at all in a bad way

I've had Budweiser's Red Bridge and have seen it at local bars thanks to the mass distribution possible. It wasn't too bad actually. I don't suffer from celiac disease and I would consider drinking it again.

Again a long time after this question was started, I can now add some more, surprisingly not yet mentioned: 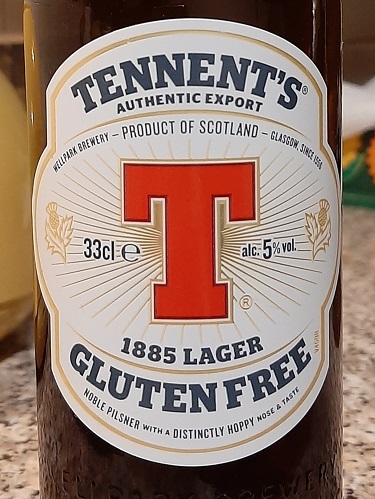 8
Why isn't Sam Adams Infinium being produced anymore?
5
Is there any diet beer?
9
Beer-A-Day (Free Online) Calendars
7
Is there a widely-accepted procedure for saying one beer is definitively “better” than another?
5
What is Ice Beer?
5
Recommendations for Tea/Fruity/Sweet beers?
4
Are Birra Moretti Beers from the series “Le regionali” still available?
0
Brewing: Which temperature should I ferment ale beer at?
0
Is the country of origin for a beer always the same as the brewers country of origin?