Glassware for lagers: why did my Stella Artois come in this kind of glass?

I've seen Why did my Big Bad Baptist come in a brandy snifter? and understand from the answer there that there are two basic reasons to use a glass with a wider bowl for beer: to concentrate armoas, or to reduce quantity for stronger beers. (That question was about a stout.)

I don't have a lot of experience with this, but until now when I've ordered lagers they've generally come in a tall glass (not curved). A few days ago I ordered a Stella Artois and it came in the following glass:1 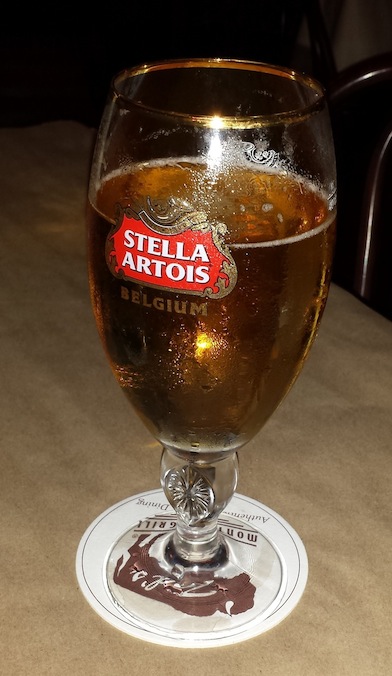 (The glass was full when delivered; I didn't think to take a picture for this question right away.)

This glass does not concentrate aromas to the extent that a brandy snifter does; further, this beer did not seem to be particularly aromatic. (I've never had this one before, which is why I ordered it.) Nor is it a highly-alcoholic or expensive beer that they might want to serve in a smaller quantity. I'd guess this glass to have been in the 10-12oz range.

Is there a benefit to the mildly curved shape of this glass for this type of beer? I note that it's a Stella Artois glass, so presumably it's not just a bartender's arbitrary choice.

1 I was traveling, so I can't just go visit them again to see how they serve other beers.

The first, and primary reason any beer comes in branded glassware is this: Marketing. Brewers, like any other businesses, like for the general public to know that the anonymous tapped beer you're drinking is theirs. That is why they provide branded glasses to bars, and request (or require) that their beer be served in their glasses.

Is there a benefit to the mildly curved shape of this glass for this type of beer?

In my observations, yes, there is. While the throat may not narrow as severely as a brandy snifter, the effect of concentrating the aroma is still achieved. Eyeballing it, I'd say that the curvature is somewhere in between that of my champagne flutes and my red wines glasses, which are presumed to have the same general effect. More generally I'd say that a glass with a narrowing or restricted throat does concentrate the aroma, and the degree of restriction doesn't seem to matter significantly, to my nose. (Assuming it isn't too great, that is. Beer in a bottle or can, for instance, is definitely at a disadvantage.)

I'd like to also look at a few of the reasons they state in their marketing material as well.

The authentic shape of the body encourages the perfect balance of C02 and liquid, enhancing head retention and flavor.

I don't have any evidence to back this up, but I suspect that this is probably the most legitimate of the claims. This would have a significant effect on the experience of drinking the beer, it is going to be specific to their recipe, and it's a reason that's often given for custom beer glassware. (Boston Beer Company laser etches the bottom of their Sam Adams Boston Lager glass to enhance cavitation, for instance.)

The angles at the bottom cause a wave that works in harmony with the liquid alchemy.

I have no idea what this means. Alchemy is the term for pre-chemistry, and primarily deals with trying to turn ordinary substances into gold. I assume they're trying to insinuate that the glass magically turns Stella into better beer.

This is plausible, and perhaps unfortunate. This is why you are supposed to hold red wine glasses by the bowl (to warm the wine) and white wine glasses by the stem (to keep it cool.) However, with wine, a serving is generally five ounces or so, compared to twelve or more of lager. The effect certainly won't be the same given the significantly higher mass. The unfortunate bit is that colder is not generally what you want when you're talking about good beer. Colder is the realm of the cheap macro-brews like Coors Light. Cold subdues flavor compounds, which is useful when the flavor of the beer is nasty, and not so useful when it's pleasant. This certainly isn't a a requirement or general best practice for lagers as you won't find stemmed glassware used for Boston Beer's Samuel Adams Lager glass: 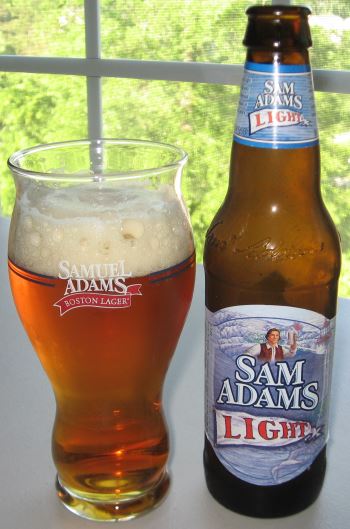 or my classic Spiegelau Lager glass:

or any of the glasses you'll see used for the many fine Lagers of Germany. So, I have to suppose one of the following two reasons. First, they may simply be pandering to the general belief that colder beer is better. Second, it would be unfortunate if they were trying to hide a lack of quality by trying to ensure the beer was too cold to taste properly.

Finally, and I've left this to last, because it's purely my opinion...I think they've chosen the chalice glass specifically because it's fancy, and that's the image they want to portray for their beer. When people see the Stella glass, they don't want their beer to be lumped in with the pint-glass styles, they want it to stand out as sophisticated, and the chalice specifically gives it that cachet.

So, my top line and bottom line are down to marketing, with a bit of truth and a bit of fiction to all the bits in between.

According to Stella Artois

In order to perfectly enjoy the unique taste and beauty of Stella Artois, we created the Chalice, instead of merely a glass. The Chalice is designed so that every curve serves a discrete purpose to how Stella Artois should be enjoyed.

The authentic shape of the body encourages the perfect balance of C02 and liquid, enhancing head retention and flavor. The angles at the bottom cause a wave that works in harmony with the liquid alchemy. The stem provides a means to hold the chalice so that the Stella Artois stays cold longer and it's embellished with a star to honor our history.

All of these details, however small, make a big impact on the flavor and experience, giving everyone the opportunity to taste a proper Stella Artois.

I grew up in Belgium, near the town of Leuven where Stella was originally brewed.

The classic Belgian beers all have their characteristic glass shapes, which are a part of the experience of the beer. Duvel, Kwak, Mort Subite and the rest come in glasses of various shapes and sizes.

The traditional Stella Artois glass was a straight, narrow-ish glass, much like that of other basic lager-style beers like Jupiler or Maes Pils. They usually have a set of ridges towards the bottom for improved grip and to reduce heat transfer. The lager brand glasses are all very similar, reflecting their status as "ordinary, everyday" beers. Only the expensive specialty beers have really distinctive glasses.

The glasses are usually small for Belgian lager (about 275ml), so the beer would still taste cold and fresh at the bottom. Larger half-litres are sold, but older Belgians would always drink a small beer as larger beers go "off".

In my view the Chalice is pure marketing bullshit. Taking an ordinary beer and dressing it up as something more expensive and more special than it is. It makes me as angry as the UK positioning of the brand as French, when it is brewed in the very Flemish town of Leuven.

Not the answer you're looking for? Browse other questions tagged glassware lager or ask your own question.

11
Why did my Big Bad Baptist come in a brandy snifter?
8
Unusal recepticles

17
What are the true origins of the yard of ale?
11
Why did my Big Bad Baptist come in a brandy snifter?