What is “Five Fruits” in this 1920s cocktail recipe?

Keep the punch in the ice box for two hours before serving time, so that it will be thoroughly chilled. Pour over chopped ice in the bowl and serve at once.

What exactly is "Five Fruits"? From context I infer that it's a sweet juice blend, maybe something like modern-day Hawaiian Punch; but I haven't been able to Google up anything about the name because everyone on the Internet wants to tell me about 1980s-era beverage Five Alive.

Old advertisements show that it was made starting in 1900 in Portland, Maine. It consisted of a syrup made of pineapple, orange, lemon, raspberry, and strawberry juices with sugar, red food coloring, and sodium benzoate as a preservative. Unfortunately, I can't find anywhere what the ratios are, but I'd start by doing equal parts of juice in a 1:1 ratio with sugar for the syrup since it was compared to grenadine as being an analogous substitute.

The Hay’s Fruit Juice Company was founded in the year 1900 and produced Hay’s Five Fruit, a fruit juice syrup used to make and flavor beverages and desserts. This album was created after September 1923, following the completion of additional construction to a recently purchased new factory at 55-71 York Street, in Portland, Maine. - Hay's Fruit Juice Company album

It could be just the liquid or the fruit with the liquid. It has five fruits, Peaches, Pears, Grapes, Pineapple, Cherries.

What exactly is "Five Fruits"?

"From context I infer that it's a sweet juice blend, maybe something like modern-day Hawaiian Punch; but I haven't been able to Google up anything about the name because everyone on the Internet wants to tell me about 1980s-era beverage Five Alive."

Due to the lack of historical data, it may be impossible to find out what exactly is "Five Fruits".

My own personal suspicion is that "Five Fruits" may be somrthing like the original Five Alive drink. 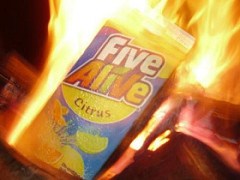 Here’s a modern image of the drink

The “Five” represents the five fruit flavors in the drink. There has been a total of seven varieties, but the original was a blend of orange, lemon, grapefruit, tangerine, and lime. I have no idea what this combination tastes like; I’ve never had Five Alive. The memory I have of this product is entirely visual, etched into my psyche from a passing glance in a grocery store some 22 years ago.

While relatively popular in the U.K. today, Five Alive’s accessibility in the United States is limited. How it fell into reticence is anyone’s guess. - Juicy Details (Five Alive) 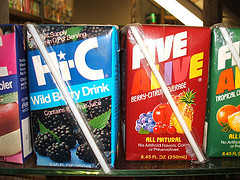 You can always use the modern Five Alive drink or Grenadine if you want. The one quarter cup in the recipe could be for either a syrup or a juice. A syrup would definitely make it more sweeter.

Not the answer you're looking for? Browse other questions tagged history cocktails prohibition mixers or ask your own question.

9
What cocktail could be paired with French cheese?
4
How can different ingredients be replaced in the Singapore Sling recipe?
4
Rose colored wine cocktail
3
Do lights and music enhance a cocktail?
6
Can wine be made from all edible fruits?
4
Human body parts in a cocktail?
4
What type of stemware is this?