Contradicting sayings about the order of drinking alcoholic beverages

Growing up in Europe we had a saying that said:

Translation: Beer after wine, leave it be - wine after beer, that I recommend.

In the US, a similar saying goes like this:

"Beer before liquor, never been sicker; liquor before beer, you’re in the clear."

Those two sayings have always perplexed me, as they seem to be contradictory. Visualizing the order of drinks it would look something like this: 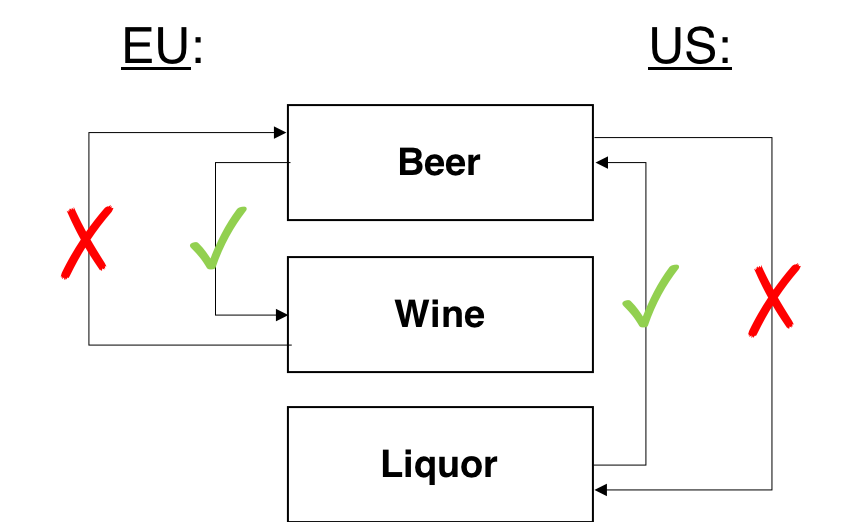 As is apparent, one recommends to drink by increasing alcohol content, the other recommends against it. Intuitively I assume that these sayings recommend best practices to prevent becoming sick (Reality Check: I understand the order of drinks is mostly irrelevant - it's the total amount of alcohol and the speed of consumption that drives whether someone gets sick.)

So my question: Are there any other reasons for why one would recommend consuming alcoholic drinks in a certain order?

According to this link, different types of alcohol have differing amounts and different types of congeners (which are one of the primary toxins contributing to a hangover) in them, leading to varying degrees of hangovers. Combining these varying toxins in different ways can lead to different results. Red wine apparently has the highest amount of congeners in it, while clearer liquids tend to have have fewer.

Another thing noted by this article is that carbonated alcoholic beverages (e.g., beer) cause the body to absorb alcohol more quickly; therefore, if you were to consume beer before liquor, your body would have even less time to deal with the alcohol absorption than the other way around.

Other than your reasoning as to the amount of alcohol content drinks contain, this is the only thing I can think of!

It's all nonsense. You get hangovers when you "mix" because if you're "mixing" you are probably drinking more than you realize. To wit, if you have a beer and then a single shot of liquor, most adults are fine - and there will be no difference if you reverse that.

The rules came from people who would have 4 beers, then switch to whiskey, then tequila and wake up with a hangover and decide it was the switching that did it when what really happened was that they had 6-8 drinks.

There was a news item about this on the BBC website which contradicts this piece of verse:

So it seems to be nonsense. Too bad.

Not the answer you're looking for? Browse other questions tagged drinking or ask your own question.

11
How can I learn to recognize the flavor and aroma of different varieties of hops?
3
Is it ok to take antacid tablet after drinking beer?
7
Traditional drinks for celebrating the Feast of the Epiphany?
7
Do Bartenders ever make their own inventive drinks for the Christmas holidays in bars?
7
Is the saying true that drinking absinthe drives a person insane?
5
Are there National Drinking Holidays?
6
Can drinking 45ml of spirit (40%) per day affect your health?
2
What causes my stuffy nose after drinking alcohol?
2
Health Effects of Drinking Slowly