What is the official way to drink a boilermaker?

What is the official way to drink a Boilermaker?

First of all there are two types of boilermakers.

A boilermaker can refer to two types of beer cocktail. In American terminology, the drink consists of a glass of beer and a shot of whiskey.1 The beer is either served as a chaser or mixed with the whiskey. When the beer is served as a chaser, the drink is often called simply a shot and a beer. In Philadelphia, it is commonly referred to as a Citywide Special. In Texas, it is known as a Two-Step. In parts of Florida, it is often referred to as a Git-Right.

Apparently there are also two ways to drink a Boilermaker. Neither one is official or wrong. It is up to the individual's choice.

There’s a large debate concerning how the boilermaker is supposed to be consumed. While the shot and beer combo might seem straightforward, there are actually several different methods for drinking it, and each one is readily accepted as the best way by those who do it – the only thing that most people agree on is that the shot must be whiskey.

The first method is your most basic, and the purists would have you believe it’s the classic: you drink the entire shot and then chase it with the beer. It’s that simple. However, as more high-end cocktail bars have also embraced the boilermaker, and thought more about the pairing of whiskey and beer, drinkers have taken to going back and forth between the two drinks, taking a sip of the shot and then a gulp of the beer, until each drink is finished.

But the most exciting way to drink a boilermaker has to be how it often goes down in London – a practice that is gaining popularity in the States as well – dropping the shot directly into the beer. A modification of this is pouring the shot into a beer can or bottle. Fans of this method say it’s the best way to see how the beer and whiskey interplay. Plus, who doesn’t love the sound of a shot glass full of whiskey dunking into a cold glass of beer? - The History Of The Boilermaker – Otherwise Known As A Shot And A Beer

Here how the boilermaker possibly got its' name:

Stories are murky at best as to how the boilermaker first came into existence, but it’s pretty clear that the drink was originally consumed by blue collar workers at the end of a long shift – which is why it’s now become the shift drink of choice among bartenders. It’s believed the drink takes its name from the workers who built and maintained steam locomotives in the 1800s. These workers were known to head to the bar at the end of the shift, and a shot of whiskey with a beer became a staple for quickly easing the pain that came from a hard day of back-breaking labor. As it was the drink consumed by boilermakers, it took on the name as well. - The History Of The Boilermaker 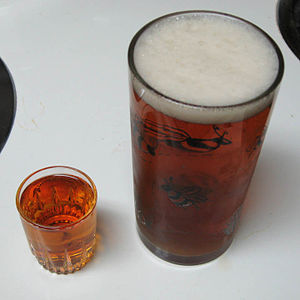 The ingredients of the American version of a boilermaker: Whiskey and beer.

In my lexicon, an Irish car bomb is guinness with a shot of bailey's irish cream and jameson dropped in. Two things to keep in mind with the addition of the irish cream: the cream will curdle quickly with the acidity of the beer, and don't chip your tooth on the shot glass. I foolishly made it once as a sipping drink and it formed a layer of foamy, curdled fat floating on top within 5 or so minutes.

Whichever "bomb" drink you choose to enjoy, please be very careful when the shot glass slides forward in the pint glass. I someone break their front tooth clean in half doing that. Much safer to do the shot then drink the beer.

Not the answer you're looking for? Browse other questions tagged whiskey beer-cocktails or ask your own question.

14
What are the factors that determine how long whisky is aged?
11
What are the pros and cons of "Non Age Statement" Whisky
3
Is there any documentation on the origins of the Sake Bomb?
9
What happens if I drink buttermilk after 3-5 drinks rum or whiskey (60ml each)?
6
Whiskey and beer recommendations for boilermaker cocktail?
10
What are the predominant styles of Whisky coming out of Asia?
7
What kind of whiskey is served cold?
10
How to correctly drink whiskey?
10
What constitutes a "stack of whiskey"?
11
What does it mean that multiple whiskey brands come from the same distillery?