After graduating from school, I served my two years of mandatory alternative civilian service with a hospital gardener in Swabia. In Winter, every morning we used to come in one hour early to drink hot beer.

Warming beer – "stauchen" in German –, by placing the bottle in hot water, was common in the southwest of Germany, and althought the practice has fallen out of use in recent years you can still order your beer "gestaucht", i.e. warmed to about 50 to 60°C (122 to 140°F), in traditional restaurants (at no extra price, of course).

Here is an image of one restaurant that uses old hot-water bottles to warm their beer as a gimmick (source): 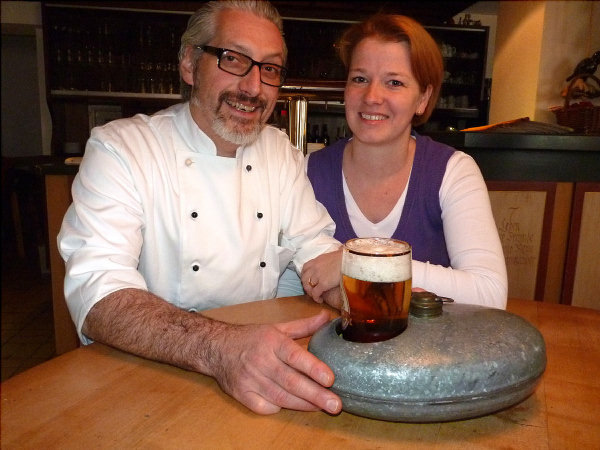 The old gardener and his younger colleague claimed that drinking warm beer would keep away any cold that working in the wet and cold outside would otherwise bring on them. We were certainly all very healthy those two winters (and got a lot of snow shovelled), so my question is:

No, drinking warm beer will not prevent the common cold.

There was at least one study conducted revealing that humulone, an chemical found in hops, could help to fight a cold. This study seems to be both biased and exaggerated, as it was conducted by a beer company and the concentration in beer is so low that getting a therapeutic dose would create more problems than it would solve. Got a Cold? Have a Beer!

I imagine that the rumor was based on either the above misleading story or a similar one based on a historical view of beer through "rose colored glasses". This coupled with the commonly known (and scientifically supported) method of drinking hot fluids to treat cold symptoms creates a believable enough tale to increase sales. Study finds hot drinks help colds.

It certainly doesn't keep the cold away or reduce the duration, but I'll be damned if it doesn't make you feel better drinking it. Mulled beer is just nice when you're cold, and when you've got the cold, the last thing you want to feel is cold.

Stews, casseroles, and chilis don't ward off the cold either. That doesn't stop people from eating ample amounts of them come autumn and winter. Neither do chicken soup nor porridge reduce the duration of a cold. That doesn't stop nearly every culture around the world from serving some variation thereof (or a mix of both, in the case of congee) to sick people.

So, why stop there? Beer is nice too. All those things also help keep you hydrated, which can never be a bad thing if you're sick.

Basically, if it makes you feel better, it may as well ward off disease. I mean, it's right there in the word. Dis - ease. A lack of ease. If it puts you at ease, it's a remedy in my book.

What's more is, that here in Poland serving warm beer with spices, sometimes with honey is really popular in the fall. And although my comment will probably get bashed by not having a medical back up -- it really feels like the warm beer helps the body fight off the bacteria/germs.

Now that I think of it...The tradition of drinking warm beer is probably comparable to drinking mulled wine (in poland referred to as Grzaniec, and Glühwein in Germany).

I wonder if adding heat alone so the body can devote more of its energy to the immune system helps fight off the flue virus that produces the thing we call a cold. I wonder if the presence of herbs in beer helps the immune system in a way we do not yet pay attention to, or understand. Could it be, that at a vibrational level of frequencies, "home remedies" function successful to accomplish something that "science" does not yet understand. I do know that the Pentagon has used frequency science to deal with health issues via research done by Sharry Edwards per: Sound Health Options.

Actually, there are studies that show moderate consumption of alcohol WILL help reduce chances of coming down with the common cold - if prevention is the key to the question...

Nonetheless, two large studies have found that although moderate drinking will not cure colds, it can help keep them at bay. One, by researchers at Carnegie Mellon in 1993, looked at 391 adults and found that resistance to colds increased with moderate drinking, except in smokers. The Claim: A Little Alcohol Can Help You Beat a Cold

Drink alcohol in moderation as a preventative measure. Studies have shown that, while a cold cannot be cured by alcohol, moderate alcohol consumption can increase one's resistance to the cold. One study has shown that drinking 8 to 14 glasses of red wine a week has reduced the chances of getting a cold by 60 percent. Knowing How Alcohol Can Help

There will be a very fine line that's easily crossed when using this as a preventative measure... Alcohol dehydrates the body which can weaken your immune system - your body needs lots of fluids to keep up it's normal function. Binge drinking has been clinically shown to lower the body's immune response.

Your body needs all of the fluids, nutrients, and rest it can get to battle symptoms once it's full-blown infected. So, drinking WHILE sick is generally a very bad idea.

With that being said, a shot of whiskey with lemon and honey might help relieve that sore throat and bring on that long night's rest that your body will be craving... Or, a warm beer (in theory.) Just the one, though!

So, I'm going back through my old answers and questions in order to upvote everyone..., I am fairly certain that this answer to my question, how did the phrase 'beer me' originate, posted by @Lordjustine was actually meant for this question instead... though I am clueless as to both what the post advises and how the answer would have been mistakenly posted on my question. In any case, I am adding it here:

I think your question has judging you to originate you and the effect of beer to you. But beer for me or other people is a vitamins, that people said drink beer only moderately to mentain the figthing virus or bacteria or anything coming from us.

and sometime beer is not valuable from minor and therapeutic patient. its beacause causing a tragic interms in our body. of you continous to drink beer

3
How did the phrase "beer me" originate?