What are some of the iconic champagnes for each decade of the last 100 years?

Which champagne / house is most commonly associated with each decade since the 1920s?

To be clear, I'm not asking what was the best wine made in each of those decades - either drinking then or since.

I suppose, I might clarify the question as follows:

What are some of the possible iconic champagnes from each decade of the last 100 years?

Similar to "classic," iconic is generally restricted to more recent, highly original, influential, or unique, works of art, artists, or performers. As such they are now well-established and widely celebrated in popular culture.

"Oedipus Rex" is a classic, but the original "Planet of the Apes" is truly iconic. - Urban Dictionary

Relating to or characteristic of a famous person or thing that represents something of importance:

For this decade I would like to propose any French champagne that puts Dom Pérignon into the spotlight on the label.

Together these areas form the Champagne region. The reason why the champagne region has been declared the only place in the world to make champagne, is due to the geographical location concerning the latitude and the changing climate, being both influenced by the continental climate as well as the oceanic climate.

During the 1930s, as Adolf Hitler was rising to power in Germany, the man who would turn out to be his most implacable foe was drowning — in debt and champagne.

In 1936, Winston Churchill owed his wine merchant the equivalent of $75,000 in today's money. He was also in hock to his shirt-maker, watchmaker and printer — but his sybaritic lifestyle, of a cigar-smoking, horse-owning country aristocrat, continued apace.

To get an idea of Churchill's annual alcohol consumption, here's what he ordered in 1908, the year he married Clementine:

Churchill drank several brands of champagne such as Giesler, Moet et Chandon, and Pommery, but Pol Roger was his clear favorite. Every year on Churchill's birthday, the charming and shrewd Odette Pol Roger sent him a case of champagne. (His other great friend, Soviet leader Joseph Stalin, sent him caviar — until they fell out over Churchill's Iron Curtain speech.) 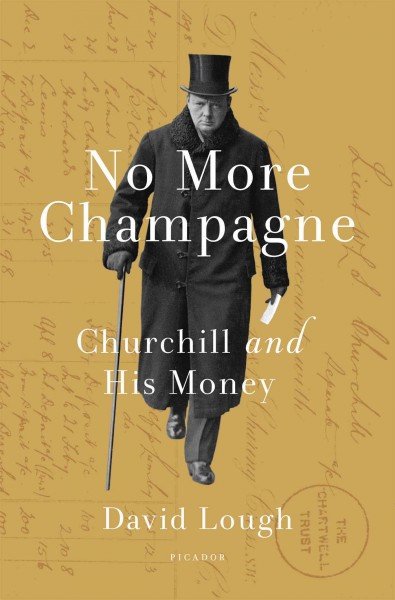 In the first weeks of the occupation, more than 2 million bottles of wine were stolen by Germans. It was comparable to full scale looting of the sort seen after natural disasters and coups, but in this case it involved some of the most storied vineyards in the world and Moët suffered more than most.

“The Chandon château on the grounds of Dom Pérignon’s abbey had been burned down and many other buildings belonging to Moët were taken over to house German troops. To add insult to injury, the company had also been ordered to supply the Third Reich with 50,000 bottles of champagne a week, or about one-tenth of all the champagne the Germans were requisitioning.”

The champagne brand of choice for Marilyn Monroe, Marie Antoinette and all the stars at the Oscars, Piper-Heidsieck champagne is one of the most iconic luxury brands and a favourite among fashion and luxury lifestyle brands. So no wonder it's still doing rather well today - after all, how many brands can say that Marie Antoinette was their first brand ambassador?

And there is more:

In a similarly extravagant vein, Marilyn Monroe was reputed to have taken a bath in 350 bottles of Champagne. - Champagne glass

There is even a Marilyn Monroe Champagne Cocktail Recipe. 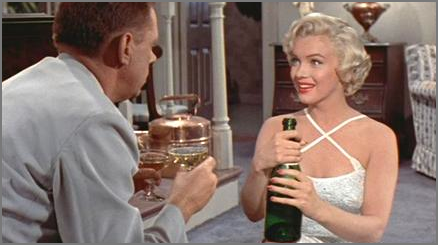 "Hey, did you ever try dunking a potato chip in Champagne. It's real crazy!" Marilyn Monroe in The Seven Year Itch (1955) - Champagne sips and chips

What about the Mumm champagne in coupe glasses?

No matter who inspired the coupe glass, it's safe to say its infamy keeps it popular to this day. Especially in the 1930s prohibition-era and in the 1960s, the coupe glass reigned as the choice for sparkling wine even if its design wasn't ideal. With TV shows like "Mad Men" and "Boardwalk Empire," old-fashioned drinks and drinking glasses have been making a comeback. Just stop by any trendy bar in New York City (or any other metropolis) and you'll find cocktails served in the coupe glass. - The Glass Shaped Like Marie Antoinette's Anatomy

In 1914, Kate Moss also had a champagne glass modeled after her left breast while pregnant.

To celebrate Kate Moss 25 years in the fashion industry, a champagne glass moulded from her left breast has been created.

Forty-year-old Moss has teamed up with a sculptor and a London restaurant to create the unique champagne glass in her honour. 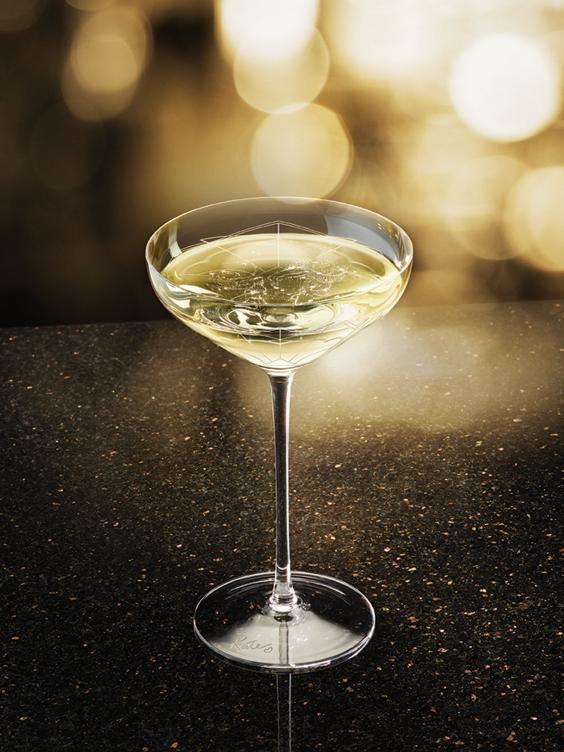 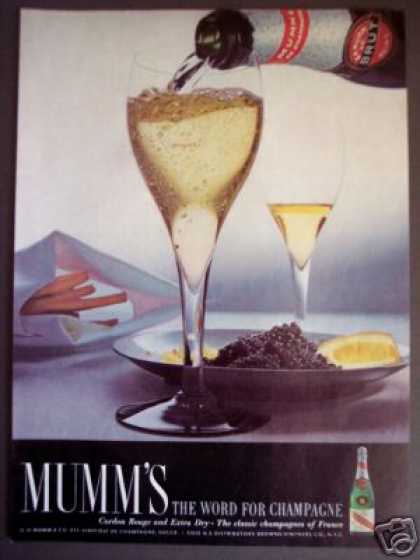 Bollinger champagnes have appeared in 14 James Bond films, dating back to 1973's "Live and Let Die."

Dom Pérignon was served at the royal wedding of Prince Charles and Lady Diana in 1981. A special insignia just for this event was put on the bottles of the 1961 vintage that was served.

Since the late 1990s, high-end champagne brands have been featured in rap and hip hop music and videos; bottles featured in videos are often quite blingy and distinctive, often gold. The Louis Roederer brand Cristal, with a gold label, has seen increased popularity since the mid-to-late 1990s due to its association with rap and hip hop artists, notably the New York rappers Biggie Smalls (the Notorious B.I.G.), Puff Daddy, and Jay-Z. This high-end image has been cultivated and managed by Cristal's US importer, Maisons Marques. Since 2006, Cristal has seen a loss of popularity and some boycotts, notably by Jay-Z, due to statements perceived as racist, with other champagnes such as Armand de Brignac (gold bottle) making inroads. - Champagne in popular culture

No New Year's Eve would be complete without welcoming the new year (and bidding an enthusiastic farewell to the prior year) with a bottle of bubbly. It's the stuff of celebrations and special occasions, and it's such a big part of holiday traditions around the world that about 25 percent of all champagne is sold in the days between Christmas and New Year's Eve. Just what is it that makes champagne the perfect New Year's drink? You might be surprised.

Champagne became the drink of choice at a huge number of landmark celebrations, from royal weddings to the scaling of some of the world's toughest mountains. It then also became linked with New Year's celebrations, which started first with Julius Caesar. It wasn't until the 1800s that staying up for a midnight party became a common tradition, and we know champagne was a major part of it from at least mid-century.

January 1st, 2000 ushered in the New Millennium and drinking champagne is such an iconic symbol for celebrating this event or any other celebration or party as Dom Pérignon and Dom Pérignon Rosé should be a part of it.

Dom Pérignon’s vintage-only champagne has earned unquestionable prestige and iconic status for its ability to evolve while “resting on the lees”—this lets the champagne develop better textures and flavours, so the next batch of the same vintage is even more intense. These privileged points in time have been dubbed “plenitudes”, and in the case of its P2 2000—the second plenitude of its vintage 2000—can take as long as 16 years to show.

Geoffroy mentions that the wine he is working on now will only be released in around 10 years, and the second plenitude, 15 to 20 years after that. Hence, he reminds us that ripeness is key to a good vintage. In fact, the extreme ripeness of the vintage 2003 harvest, which he describes as “insane and out of balance”, was too much for many but not Dom Pérignon, which saw opportunity in the challenge and eventually declared it a vintage year. “It was the mother of all hot vintages,” he exclaims. - We Taste Dom Pérignon’s P2 2000 Champagne In Beijing With Alain Ducasse 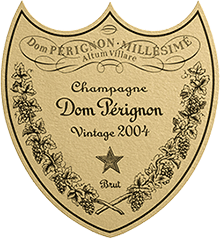 The 2004 vintage of Dom Perignon is worth the treat and is a Champagne apart from the rest with notes of marzipan and dry cocoa powder and racy minerality. The toasty finish on the palate is pleasantly unexpected. It is a really well-rounded Champagne with even darker notes on the finish with a kick of spice.

There’s no better way to ring in the New Year, than with a glass of Dom Preignon. - Dom Perignon 2004

For the 2010s: Juglar, Veuve Clicquot and Heidsieck Champagnes (until this decade is over)

The decade is not over, so let us wait a few years to truly answer this one. In the meantime I place these three champagnes temporarily as an honorary iconic examples of a champagne that is well made and bottled as preservation in obscure and precarious situations shows!

Owing to the constant temperature between four and six degrees, the dark surroundings, the pressure inside the bottles and the pressure at the bottom of the sea, the champagne was in extremely good condition. Each bottle was uncorked, tasted and classified by international expert Richard Juhlin.

Out of the bottles that were salvaged, 95 were from the Juglar champagne house, which closed down in 1829. The same owners produce Jacquesson today. Veuve Clicquot was represented by 46 bottles and Heidsieck & Co by four. The Veuve Clicquot bottles were dated 1841–1850. - The oldest champagne found at the bottom of the sea 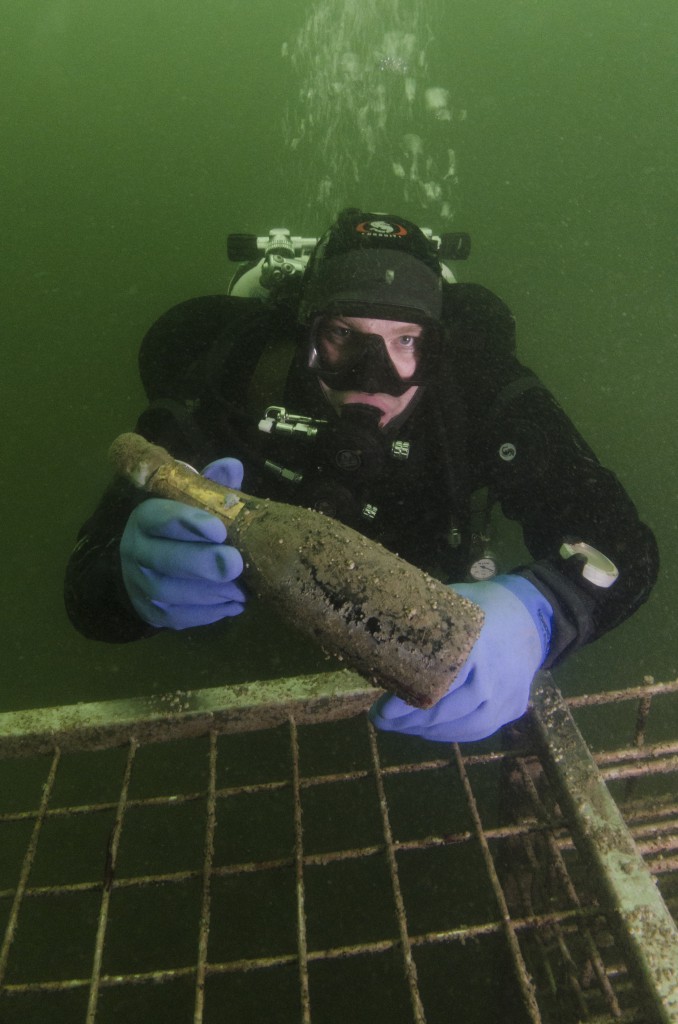 Not the answer you're looking for? Browse other questions tagged champagne or ask your own question.

2
When some one uses “sweet” to describe Blanc de Noir Brut Champagne, what does it really mean?