Brewing in a rented space/place.

Can you brew beer in an apt? I could let it age in my closet, or the balcony storage shed.

The only concern I'd see right away would be making sure you don't lose your deposit if you have a blow out during fermentation and beer sprays all around. I've not done it in an apartment, but I just use my stove and a wort chiller that attaches to my sink, so there isn't anything in that process that would be a problem in an apartment.

I suppose if you want to use a big propane burner for boiling the wort you might need to check if such things are permitted at your property. If they don't allow BBQs you probably couldn't use that type of burner. If you've got the time you should be able to do it on most stove tops though. And more time to brew means more time to enjoy previously brewed after all!

For the fermentation, ideally you'll want a dark place that's reasonably temperature controlled, but if your apartment has its temps in a reasonable range you could probably make it work without a special fermentation chamber--which you could also likely buy or make if you care enough to.

Can you brew in an apartment?

The short answer is yes.

Here is a nice read.

I brewed my first batch of beer in my tiny Syracuse apartment while the snow piled up outside.

Some people are turned off by the idea of small-batch brewing (one to two gallon batches) because they like to produce beer in larger volumes (five to ten gallon batches), and that’s okay—I like beer as much as the next guy, and having a large supply of it is (almost) never a bad thing. There's also a lot of comfort in that many of the homebrewing recipes and kits available cater to the familiar 5-gallon scale. However, there are a number of distinct advantages to small-batch brewing—especially for people living in small spaces—that I’ve come to realize over the years. In this post, I’ll share a few of them.

A 5-gallon batch of beer will fill about 50 12-ounce bottles. That’s a lot of beer to store in your living space—even if you are drinking a few a day. And don't forget the pair of 5-gallon buckets you'll need to stash somewhere. At the 1-gallon scale, a single batch of home brew can fit in your fridge (easy access!), and your equipment can sit right on your countertop. Sourcing and storing ingredients is a breeze as well, as most 1-gallon recipes use between 2 and 3 pounds of grain, significantly less than their 5-gallon counterparts. Trust me, your significant other will thank you for the extra space! 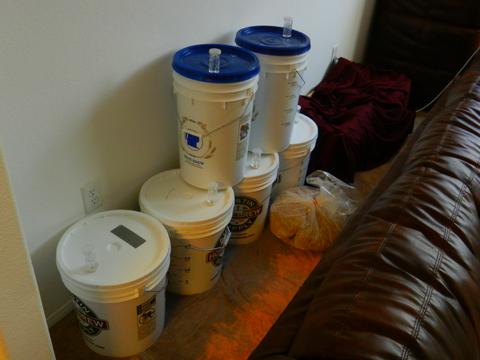 Brew storage in a closet

Of course, there’s something to be said for the economies of scale you can experience when buying ingredients in bulk. But as mentioned above, urban dwellers don’t always have the luxury of extra space. And when making only one to two gallon batches, picking up everything you need at the homebrewing supply store won’t break the bank. If you have a favorite recipe, you can scale it down proportionately.

For any homebrewer who’s learned a lesson in sanitation the hard way or woke up in the middle of the night to a symphony of bottle bombs exploding, you know it’s a total bummer. But as you scale down the cost of your brew, a bad batch poses less risk to your bottom line. This can be especially beneficial if you’re brewing with some expensive ingredients.

For most homebrewers, it doesn’t always make sense to brew a five or ten gallon batch every two weeks, especially when a brew can consume the better part of a day. But with small batch brewing if you've got the funds, it's pretty easy to routinely pump out a gallon or two at a time. A shorter process means you're likely to brew more often. Home brewing is so much of a learning-by-doing hobby, that this type of iterative process can elevate your skills at a much faster rate. Testing out variations on the same recipe between small batches is a great way to perfect your beer!

Just about anyone who's brewed a 5+ gallon batch of beer has spent a long night patiently waiting for water to boil, and after brewing, waiting for the beer to cool to the proper temperature. Although those can be among the most rewarding nights for some, a quicker process is a great bonus for most small-batch brewers, and helps us squeeze in an evening of brewing beer even during a busy week. With a brewing process which can clock in at under two hours from start to finish, brewing small has convenience on its side. You'll need little more than a stirring spoon and your arm to craft a tasty batch of beer. In contrast, the logistical "bigness" of a 10-gallon batch can be a big turnoff for some—lugging hefty pots of water and grain hither and yon is a daunting task.

The size of your batch does not have to limit the amount of creativity you put into each one. However, the frequency, cost and required storage can absolutely be limiting factors. Brewing small means you're free to experiment with a variety of styles and recipes without going "all-in." With such a quick turnover between batches, you can always keep your fridge stocked with new and interesting choices. Suddenly you can lager your beer without a dedicated fridge, or test out some new and different ingredients you've had your eye on. Oyster stout, anyone?

With larger batch brewing, you can easily generate 15 to 30 pounds of wet grain. Managing that waste is a challenge for home brewers living in a city apartment--especially when taking out the trash is already a hassle. Wouldn't you rather deal with 3-5 pounds of waste instead? Better yet, with even a little culinary flair, you can turn your spent grain into all manner of delectable treats!

Not that you hear about too many homebrewing-related house fires or injuries, it's worth mentioning that brewing in smaller batches gives you a bit more control over what's happening. Coupled with the fact that it's a shorter process, better control more often than not results in a safer brew. Handling big volumes of heated water can result in burns, and over time, large 5-gallon glass carboys can weaken and be quite dangerous when they shatter—not to mention the loss of an entire batch of beer. - 9 Reasons Urban Dwellers Should Consider Small-Batch Brewing

More can be gleaned from these sources:

Not the answer you're looking for? Browse other questions tagged storage home-brew or ask your own question.

11
How do I determine the shelf life of beer?
9
What's the best way to store beer while camping in hot climates?
11
What determines how much foam a beer produces when it is poured?
6
How bad is it to storage beer at 20 to 25 degrees celsius?
9
Can home-brewed mead be dangerous?
1
Brewing mead with fruits
4
Vintage port stored on the side
0
Brewing: Which temperature should I ferment ale beer at?