Why is Frankfurt famous for Apple Cider?

Why is Frankfurt famous for Apple Cider?

And is Apple Cider considered a beer? Can any Cider be a beer?

Due to differing geographic and climatic conditions, different areas of Germany specialize on different kinds of agriculture. The area to the south and west of Frankfurt is one of the major fruit producing regions in Germany (red in the map below, source): 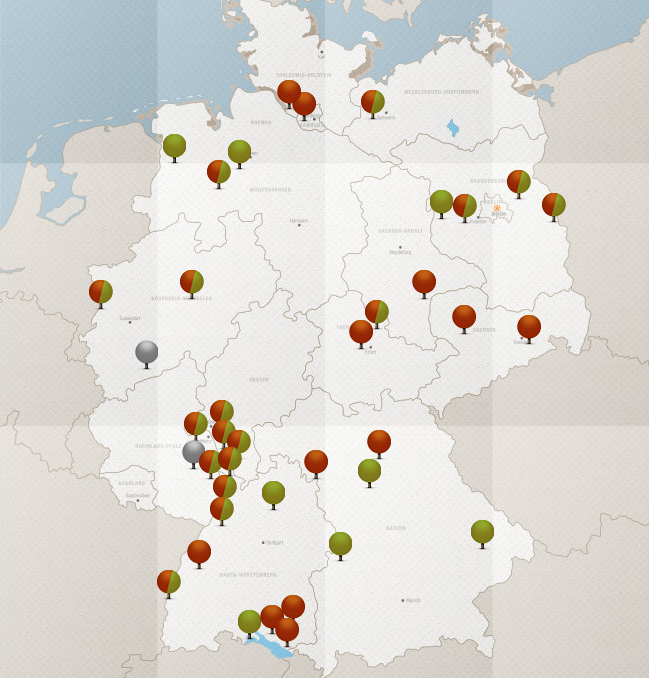 In this area apple trees start to bloom much earlier in the year than elsewhere (source, visit link to see the progression of apple blooming over Germany): 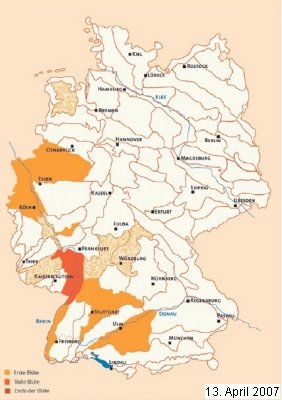 Since people like to turn everything they produce into alcoholic beverages, fruit wines – of which (grape) wine is a just a variety – are common and popular in fruit growing regions. Most popular with everyone I know is home-made strawberry wine, but plum wine is a favourite, too, and any berry or fruit is used, with every family that owns a garden making one or two bottles of these fruit wines each autumn.

Apples are different because we grow so much more of them than strawberries or plums, and they are regularly pressed into apple juice in large quantities by the fruit grower cooperatives that sell it to the beverage industry. If you don't pasteurize the juice (for long term stability), it turns alcoholic after a couple of days, and after the apple harvest everyone gets large cannisters of freshly pressed juice from the cooperative presses, bakes onion tarts ("Dinnele"), and eats and drinks this seasonal speciality, with more or less alcohol, depending on taste.

"Most" (must) or "Süßmost" (sweet must) is freshly pressed juice; once it has turned alcoholic (and sour) it has different names in different areas, such as "Sauermost" (sour must) and Apfelwein (apple wine).

Within southern Germany and Austria, Frankfurt is not specifically famous for apple wine, the drink, because it is drunk elsewhere, too. What the region around Frankfurt is somewhat well-known for are the festivities surrounding the end of the apple harvest and the pressing of apple juice, which have been the background theme for a musical tv show, Zum Blauen Bock (The Blue Goat Buck), that ran from 1957 to 1987. The tv studio for that show was styled like a Hessian apple wine folk fair, and the moderator gave each of the folksy musicians and other guests one "Bembel", the stoneware jug traditionally used to serve the apple wine in that region, for them to take home.

At that time there were only two national tv channels in Germany, and many kids grew up spending cosy weekend family tv evenings watching that show. I would guess that this is what makes Apple Wine "famous" (for us), but only in the special Hessian pronunciation "Ebbelwoi".

I can't speak to the fame of Frankfurt, but Apple Cider is not a beer by most or all common definitions. It's probably closer to a fruit wine. The major characteristic that defines beer is that some conversion has taken place which converts starches from a grain of some sort into sugars, while wines are simply fermenting simple sugars already present in a fruit's juice.

Ironically this makes Ginger Beer more like a wine and Sake, though commonly called Rice Wine, more like a beer.

Not the answer you're looking for? Browse other questions tagged german-beers or ask your own question.

5
What kind or kinds of beer are common in Bavaria, Germany?
7
What characteristics does Becks have, and what are similar beers?
5
Why does Trento (Italy) have such a range of German beers?
4
How fast do I need to finish a Hefe Weissbier Keg?
6
In Germany, Out of pale ale
4
Craft/micro brewery in Saarland, Luxembourg and Lorraine region?
6
Is the german "Warsteiner" a Pilsner?
5
Are Oktoberfest beers available in Germany before the official start of the festival?
5
Does "ice-cold filtering" have additional value for a beer?
4
Why do some non-alcoholic beers have sugar?