Can all sugars be used for brewing?

While we generally focus on glucose, sucrose, and fructose for brewing, there are a lot of sugars out there. Can all of these be used in the brewing process, particularly for beer? What are the effects of using more esoteric sugars such as dextrose, xylose, mycose, or mannose alongside normal brewing grains? What about amino sugars such as glucosamine?

Some sugars won't start a fermentation with brewer's yeast at all, such a lactose. In such case, sooner or later other organisms would take over (e.g. lactobacteria).

Any sugars that can be fermented, would ferment at different speeds. As there is usually more than one kind of sugar present, the easy ones ferment first until the alcohol kills off the yeast, leaving the more difficult ones behind. Fermentation usually continues at that point, just a lot more slowly.

The difference in the effect is minor as long as everything is fully fermented. An example of such a difference is fruit wines and beer. Fruit wines contain minor amounts of methanol while beer usually does not. Differences in flavour are more about what is not fermented.

Mannose can definitely be fermented by brewer's yeast. Dextrose is just another name for glucose.

Can all sugars be used for brewing?

I would venture to say yes for the most part. That is all sugars expect maltodextrin and lactose.

But before I can answer the questions above, I do need to lay some groundwork and describe the different building blocks. It won’t take long and once you understand what everything is made of, it becomes a lot easier to understand the answers. All sugars are carbohydrates, molecules that contain both carbon (carbo-) and hydrogen (-hydrate) atoms. Carbohydrates have the general formula of CnH2nOn, meaning they have one carbon (C) and one oxygen (O) to every two hydrogens (H2). In sugars, the “n” usually equals 5 or 6. For example, glucose has the formula C6H12O6, meaning it is constructed of six carbon atoms, twelve hydrogen atoms and six oxygen atoms. Incidentally, fructose also has the formula C6H12O6, but the atoms are arranged differently in the molecule.

The most common type of sugar is called glucose (aka. dextrose, blood sugar, corn sugar). Glucose is a monosaccharide, hexose-type sugar, meaning that it is a single molecule consisting of six carbon atoms. Other hexoses relevant to brewing are fructose and galactose. Elementally, these monosaccharides are all the same, but they are isomers of each other i.e., their chemical structure and arrangement gives them different properties. For instance, an isomer of glucose called fructose (also known as fruit sugar), tastes sweeter than glucose.

Let’s examine the sugars found in a typical beer wort made from 2-row barley base malt. The main constituent of wort is maltose, which typically comprises around 50% of the total carbohydrates in wort. This is followed by maltotriose, which comprises around 18% of the total carbohydrates. The remainder of the wort is made up of glucose (10%), sucrose (8%), fructose (2%) and finally assorted dextrins, which together account for 12% of the wort carbohydrates.

Yeast are apparently very methodical little organisms. Even though sucrose usually comprises only a small percentage of the wort, studies have shown that most brewers yeast strains seem to work on it first — breaking it down into its glucose and fructose components. Once the sucrose has been broken down, the yeast cells consume the glucose first, followed by fructose, maltose and finally maltotriose. Some yeast strains behave differently; consuming maltose at the same time as the monosaccharides, but this seems to be the exception.

Most yeast strains are glucophilic, utilizing most of the glucose in the wort before consuming the other monosaccharides. They also ferment most of the monosaccharides before fermenting maltose and subsequently maltotriose. In fact, it is known that high levels of glucose and fructose in a wort (e.g. >15–20%) will inhibit the fermentation of maltose. This repressive behavior is probably a common cause of stuck fermentations in worts containing a lot of refined sugars — the yeast have fermented the monosaccharides and then quit, leaving more than half of the total sugars unfermented.

Yeast metabolize the different wort sugars in different ways. To consume the disaccharide sucrose, the yeast utilizes an enzyme called invertase, which works outside the cell to hydrolyze the molecule into its components — glucose and fructose. The glucose and fructose molecules are then transported through the cell wall and metabolized inside the cell. Conversely, maltose and maltotriose are transported into the cell first, and then are broken down into glucoses by the enzyme maltase. Even though the enzyme for both sugars is the same, maltose is typically consumed first, indicating that the cell wall transport mechanism for the two sugars is different. Maybe maltotriose is too big to get through the maltose door!

The take-home message is that all fermentable sugars are broken down into monosaccharides like glucose before being utilized by the yeast, and that yeast evidently prefer to eat their sugars one course at a time. This has big implications for wort formulation in our pursuit of new recipes and unique styles. 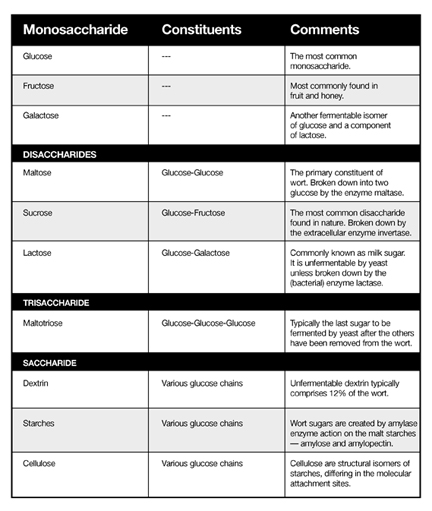 Lots of different sugars can be used in brewing, and now that we know what the yeast want to eat and when, we can make better choices for their use. Which brings us to a good starting point — why would we want to use anything other than the sugars that come naturally form the barley? 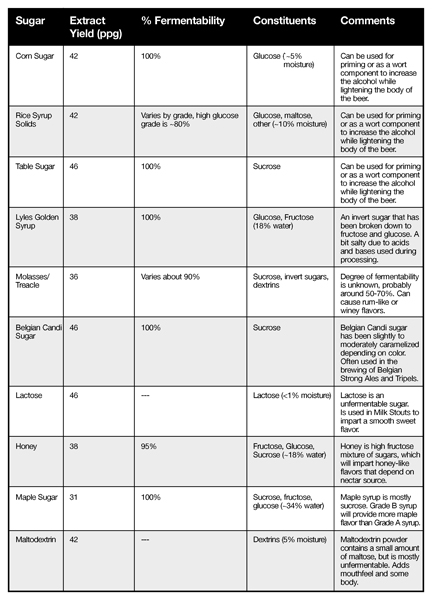 Brewing Sugars & How To Use Them

Not the answer you're looking for? Browse other questions tagged brewing craft-beers yeast or ask your own question.

7
What is the average brewing time for craft beer?
17
What is the highest alcohol content achievable through brewing?
7
What steps in the brewing process affect alcohol levels?
10
How does boil time directly affect ABV% & IBU?
2
The quality of beer from one gallon brewing equipment versus more robust equipment
4
What does Single Turn, Double Turn and Triple Turn mean in brewing?
0
Brewing: Which temperature should I ferment ale beer at?
3
Sealed beer can doesn't feel full