Strip 10 of the Eavesdropper comic strip shows a small bar with a sequence of seven liquor bottles on a shelf. Can you identify them? 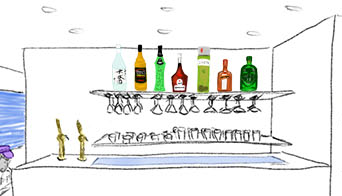 The comic strip apparently has a series of puzzles, with one puzzle encoding a word found on each page of the comic strip (except for the first few pages). We don't yet know where the puzzles are going, but then the comic only has 18 pages so far out of approximately 100 planned.

We have already identified a few of those bottles, see my answer.

We already have three bottles identified. From left to right

The solution might be another liquor, Sambuca, from reading together the first letters of "Skye, Advocaat, Midori, Benedictine, Umeshu, Cointreau, Antitoxin".

Not the answer you're looking for? Browse other questions tagged liquor identification or ask your own question.

4
Does beer cause more fatigue than liquor?
5
Is it true that Rodenbach beer should be drank with a shot of cherry liquor?
5
What was the most common hard liquor of the Late Middle Ages?
2
Things people put in bottles of liquor or liqueur and are sold commercially?
1
Liquor before beer never fear
6
Is it possible to identify this bottle and its contents?
2
Bottle of Rum covered in leather