How do Hungarians most commonly consume Palinka?

Pálinka is a traditional fruit brandy in the Carpathian Basin, known under several names, and invented in the Middle Ages. Protected as a geographical indication of the European Union, only fruit spirits mashed, distilled, matured and bottled in Hungary and similar apricot spirits from four provinces of Austria can be called "pálinka".

The question is, how is this spirit most commonly consumed in this region? Is it usually drunk neat/on rocks or do Hungarians usually mix it into cocktails?

How do Hungarians drink Palinka?

Pálinka should be served at 18–20 °C (64–68 °F) because it is at this temperature that the fine smell and taste of the fruit can be best enjoyed. If served too cold, the smell and the taste will be difficult to appreciate.

The form of the glass used to drink pálinka affects the drinking experience. The ideal glass is wide at the bottom and narrow at the rim, that is, tulip-shaped. The relatively narrow neck of the glass concentrates the "nose" released from the larger surface at the bottom of the glass, magnifying the smell of the drink. - Pálinka (Wikipedia). 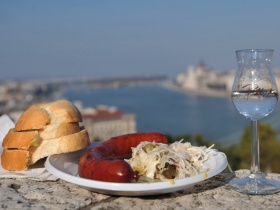 It is traditionally drank in a tulip glass, straight and not mixed in one shot or sipped a little at a time. To truly appreciate Pálinka, it should

•It’s best to serve (and consume) at room temperature in a tulip-shaped shot glass. This temperature maintains the flavours of the fruits.

•There is no strict rule or tradition when to drink it however as Hungarian cuisine tends to be on the heavy side it’s good to have a shot (…or two) prior to a meal…and then close the meal off with another one (…or two).

•It’s not compulsory to drink it in one go…. said no Hungarian ever! However we are lenient with foreigners so drink it slow!

•It WILL burn your throat: don’t worry, that’s normal.

•The most popular flavours are apricot, plum, pear, cherry, grape and apple however flavours such as elderflower, quince and all sorts of berries are starting to become more popular. - How to Drink: Pálinka

Pálinka is generally not mixed.

Though some mixologists are experimenting with adding pálinka to their cocktails, you’ll usually find it served on its own. The wince you’ll make in anticipation as you catch a whiff of your shot is all part of the fun, as is the expected slamming of your glass onto the table once you’ve finished your drink. - Hungary’s Water of Life

Pálinka should be served somewhere between 10 - 15 °C. While many drink it as a shot, the more traditional Hungarians will drink it as a low drink, sort of like whisky. Don’t be surprised if you hear people shouting ‘Isten, Isten’ (God, God) before drinking it, that is just part of the Pálinka tradition. - Pálinka - The Hungarian Whisky

Hungarians love to eat sausages with their Pálinka, as can be seen at their Budapest Pálinka and Sausage Festival.

Sausage and pálinka go well together, so be sure to visit one of the sausage stands and sample their homemade products, such as Gyulai and Csabai kolbász. - Budapest Pálinka and Sausage Festival

Not the answer you're looking for? Browse other questions tagged liquor consumption or ask your own question.

5
How can I determine whether infused spirits contain sugar (before buying)?
3
How should one store liquors in a home bar?
5
What was the most common hard liquor of the Late Middle Ages?
2
How can I layer liquors on top of each other?