I recently purchased a new pewter Tankard with a glass bottom and a silver shilling encased between the two bits of glass.

After a little bit of research, I discovered that this was one of the ways recruiters would trick people into joining the British Army or Navy, but there is also a lot of places that say this is just a legend!

Does anybody know the true origins of the shilling in the bottom of the tankard and is that why they started to produce tankards with glass bottoms so people could see if they did have a shilling in them?

history serving
share|improve this question
edited May 27 '16 at 6:59

The origins of the King's Shilling seems to have appeared about the time of the War of 1812, because of the need for recruitment was so necessary due to the fact that the English were already at war with France.

Recruiting parties scoured the countryside and city streets for able-bodied soldiers. In his arsenal of weapons, the recruiting Sergeant offered any perspective recruit a bounty of over two month’s worth of wages to enlist. Some were offered the option to enlist for limited time of service, usually a 7-year term, and receive a smaller bounty, but most chose the other option: service for life. Calculating one’s options in life must have been difficult for the recruit in a noisy, smoke-filled Ale House after consuming a number of gills of rum, happily provided by a member of the recruiting party. While the recruiting prospect drank endless rounds from the punch bowl, his ears were filled with stories of an easy life as a soldier, quick promotion and how women to could not help but be drawn to a man in a red coat.

The members of a recruiting party were all quite motivated in convincing say a young weaver or labourer to join as each was paid handsomely for each recruit they brought before the army surgeon for inspection and got attested by a Justice of the Peace. If the potential recruit hesitated to enlisted, deception was applied. A recruiting sergeant recounted:

…your last recourse was to get him drunk, and then slip a shilling in his pocket, get him home to your billet, and next morning swear he enlisted, bring all your party to prove it, get him persuaded to pass the doctor. Should he pass, you must try every means in your power to get him to drink, blow him up with a fine story, get him inveigled to the magistrates, in some shape or other, and get him attested; but by no means let him out of your hands.

Why the expression To Take The King's Shilling:

The expression 'to take the king's shilling', meant to sign up to join the army. Rather like with the 'prest' money for the 'impressed' man, a bonus payment of a shilling was offered to tempt lowly paid workers to leave their trade (an average daily wage during the Napoleonic period was 2p (at 12p to a shilling, this represented six days wages in one go). Once the shilling had been accepted, it was almost impossible to leave the army.

Since the army was not seen as an attractive career, recruiting sergeants often had to use less than honest methods to secure their 'prey', such as getting the recruitee drunk, slipping the shilling into his pocket and then hauling him before the magistrate the following morning (still hungover) to get him to accept the fact that he was now in the army. Sometimes the 'King's shilling' was hidden in the bottom of a pewter tankard (having drunk his pint, the unfortunate drinker found that he had unwittingly accepted the King's offer). As a result, some tankards were made with glass bottoms. Other recruits came from the courts, where a criminal's sentence could be commuted to service in the army - still the case (apparently) with the Blackwatch Regiment.

In fact the bounty for joining the army was much larger than a shilling. New recruits received £23.17s.6d, but out of this they were obliged to buy their uniform - a not inconsiderable expence.

Here is a picture of the King's Shilling Tankard in question: 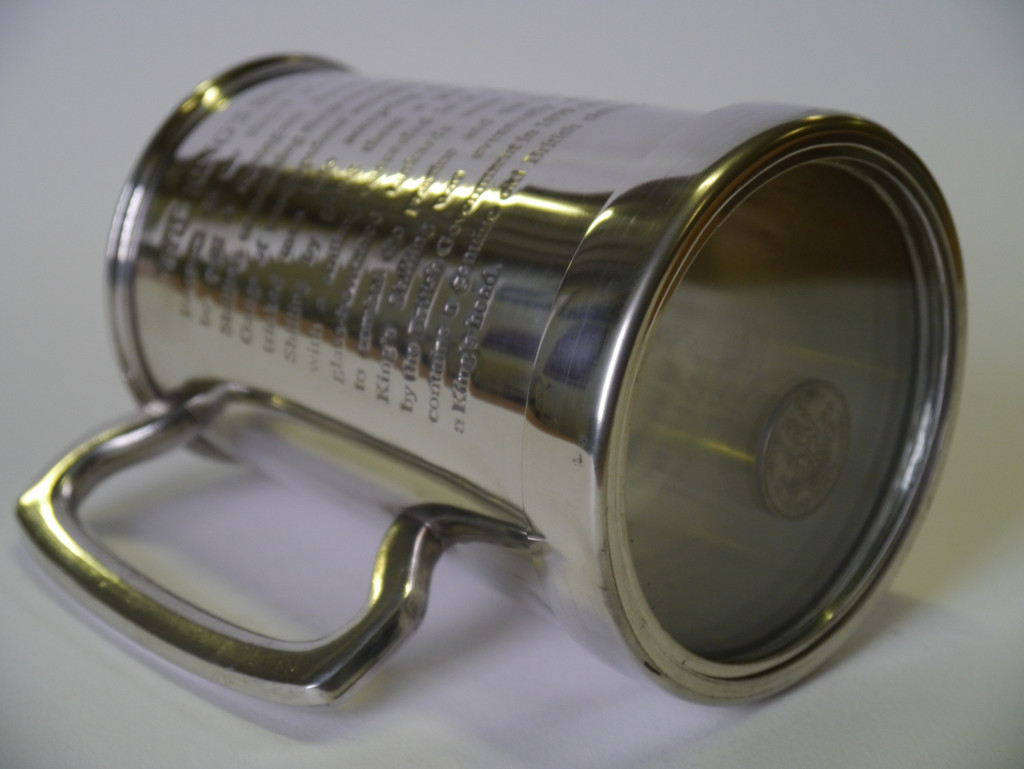 When you joined the army the final part of recruitment was to be paid a shilling. When the recruiters came to a village they would go to the local bar to try to persuade young men to join. One way to do this was to put a shilling in the tankard. I'm not sure if that is the reason for glass bottom tankards though, anyone rich enough to own one would probably be to old to fight. Another story is the glass bottom was so you could see a punch coming when you had the tankard raised.

Personally I think it is just so you can see if the beer is cloudy.

Not the answer you're looking for? Browse other questions tagged history serving or ask your own question.

13
When in the history of serving beer did it transition from a warm beverage to a cold one?
17
What's the difference between a cask beer and a kegged beer?
17
What are the true origins of the yard of ale?
9
“Green Schlitz” myth: Was the beer green, or the flakes?
4
Which is the most expensive beer as of now?
4
Why and when did the interest for micro breweries and craft beers arise?
7
What are some of the historical ways that people have employed to conceal alcohol on their person?
8
When does the pour matter?
5
When and why did wineries start diluting wine?
2
What does the absinthe ritual do?