How common is Guinness with a Smithwicks head in Ireland?

I was just in Ireland on holiday and obviously went to some pubs. Of course Guinness is everywhere there. While in Dublin, I got advice that a common drink was not only regular Guinness though, but 'Guinness with a Smithwicks head' and any barman would know it. So I tried it out, it was fine, nothing special.

Now I'm home and I Googled guinness with a smithwicks head and there are like no results. So my question is: Is this really a common Irish drink or is this just something they tell visitors so it's easier to spot the tourists?

As Anon mentions above, you're probably thinking of Smithwick's with a Guinness head, rather than the other way around — Guinness has a creamier head, which I think is the reason why people order it.

It is not, by any stretch a Black and Tan — and yes, the name would be seen as offensive by most in Ireland and I have never heard ordered by locals (this is a sure way to spot a tourist) — which, as far as I know, is normally made with a larger or pale ale (Smithwick's is a red ale), and whose ratio is more like 50:50. It would look something like this: 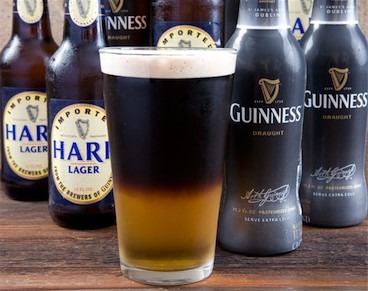 Smithwick's with a Guinness head is just that — the proportion of Guinness in the drink is just the head, i.e. maybe a inch on the top of the glass. The pint of Smithwick's is poured as normal, with a small amount of Guinness added at the very end, which sits on top of the pint giving it a head of stout. Adding too much Guinness at this stage will cause the beers to mix, and will ruin the pint.

Can't find a picture of it, but it will basically look like a pint of Smitwick's with a creamer (look and texture) head, and taste as such.

As a barman in a country pub for a couple of years during college, I had a couple of regulars who used to order it. It's not particularly common, but neither is it unusual — any barman should know what you want and be able to serve it.

A Black and Tan refers to Guinness & Bass, and the name black & tan is a reference to the colors of the uniforms the British Soldiers wore. A half and half refers to Guinness & Harp. While I can't speak for what it would be called in Ireland (as I have yet to be, but soon !!), a Blacksmith is usually Guinness & Smithwicks here in the states and it has become my favorite.

It is quite common but is usually Known as Black and Tan.

So searching Guinness with a Smithwicks head wont get you a lot of results, but Black and Tan is a quite common drink

Although as far as I know, it originated in England - but was linked to Ireland with its ties to the Royal Irish Constabulary Reserve Force, which was sent into Ireland in the early 1920s and nicknamed the Black and Tans.

The Black and Tan almost certainly came from England, and the first written mention of the drink comes from the Oxford English Dictionary in 1889.

More information on Black and Tan