Are we born to either like or hate beer?

I know some people like beer so much while some other resist do drink, is it determined by DNA? Can the situation be changed?

Beer is a taste preference, and therefor the chances exist that you may "learn" to like beer.

As a child I tasted the pale mass-produced lager that my father drank and I did not like it. But children (usually) prefer sweet over bitter.

As we grow older, our taste change and we learn to enjoy a more varied amount of flavours, including bitterness, and we then start to enjoy beer more.

Another thing to take into consideration: There are MANY different types of beers! A person might love sour beers, but hate IPAs. Or prefer Bocks over fruit beers. It is a personal thing, but it means that, even though you do not like one style of beer, it does not mean that you will hate all beers!

As a brewer once said: "If you have have not found a beer you love, keep drinking more beer" 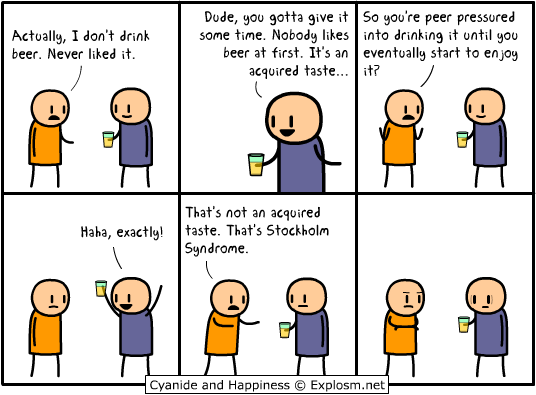 I will put forth my own experience. I disliked beer when I was young. It was not until I tasted ale imported from England that I liked it and sought it out. I loved Samuel Smith's, Old Peculiar, Bass Ale, and others. I expanded from there and sought out other beers and ales that were not your ordinary North American Lagers and found many I liked. I quickly discovered homebrewing while perusing a used bookstore. This was way before it was popular here and way before 'Craft Brewing' was a term that people knew. I started to make my own. Now I really like beer. However I still don't really like most of the big-brand beers. And I don't drink beer as a thirst quencher. But if someone offers me a beer - I am no snob and say yes.

As far as DNA or genetically based dislikes. I don't think there is a 'beer' gene. There may, however be genes that make people dislike, or at least avoid certain tastes or aromas, or perceive these in different ways. These could then translate to dislikes of beer. However, there are so many types of beers that this is probably very unlikely. It would at least it's unlikely that beer would be the only thing that would be affected by this inheritance.

I think a dislike of beer can be overcome. Many people have notions of beer that are not really true. A friend said she hated dark beer because it was too bitter. I explained that this was not really true (that all dark beer is very bitter). So, I brought over some examples that were not bitter, but chocolaty, sweet, roasty, etc. She now loves dark beers (most are actually not very bitter). With some people it is really difficult to overcome these dislikes however. But at least, in my opinion, most of these dislikes are learned.

Where this conception comes from is that almost everyone who has their first beer drinks some of the worst beer out there, usually in their teens because they're surrounded by masses of other people who also don't know anything about alcohol.

So their first impression of beer is either a Heineken, Budweiser, Canadian, Guinness, etc, and that's what they decide beer is like. People who want to get drunk continue drinking it and eventually acclimatize to it, and people who really don't like generics end up switching to sweeter alternatives.

The thing about beer though is that there is a huge variation in flavours and styles. To try a Budweiser and then say "I don't like beer" is really saying "I don't like Budweiser". It's an opinion that arises out of the ignorance of what's available to the consumer.

And so I'd argue that if almost anyone wanted to make an honest attempt to find a beer they liked, they would eventually find something under the enormous 'beer' label that they enjoyed. I've just convinced way too many people who thought they didn't like beer to start drinking it to believe it's at all hereditary. Psychological? Maybe. Genetic? No.

Beer contains alcohol. Beer is addictive because some people are indeed predisposed to be an alcoholic. Beer drinking is no different than any other method of consuming alcohol. Yes, alcoholism is in your DNA. That's why some people get carried away with the allure of Beer only to find out that they are now dependent on alcohol.

Easy Peasy. Answer is good Ya?

Not the answer you're looking for? Browse other questions tagged health or ask your own question.

6
Does beer really help to improve muscles?
9
Myths and truths about alcohol and antibiotics
16
Is beer healthy if drunk in moderation?
4
Is it safe to consume alcohol while eating raw oysters?
3
What is the best alcoholic drink for gout patients?
4
Alcohol sales dropping due to name similarity with other things
1
What possible health benefits are there with drinking alcohol in moderation?