Causes for regional differences in brewery count in the United States

I recently came across the following map of number of breweries per 1 million population in the United States: 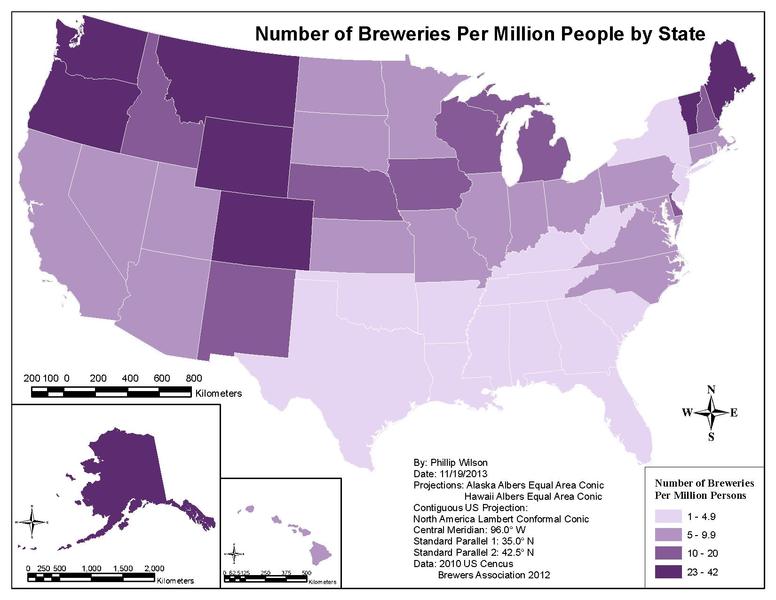 What is the main cause for these regional differences? The impact of climate? Laws and regulations in different parts of the U.S.? Regional demand differences? Something else?

I believe it is mostly due to the laws of each state. Brewers Assoc. stats.

The states with the most breweries per capita follow the federal statute, which allows for 100 gallons per person of drinking age up to a maximum of 200 gallons per year. The states on the map with the least breweries have only recently relaxed their laws on homebrewing and alcohol sales in general.

Many homebrewers dream of starting their own brewery or pub, but they need to be able to practice their craft. I am unable to locate the minutes to the Alabama House of Rep. discussion online, but the Basic Brewing Radio Podcast did air a snipped of the floor arguments on the legalization of homebrewing. Some of the arguments against were uniformed and antiquated.

Why open up a beer business in a city/county/state where regulations and attitudes are opposed to your product?

Not the answer you're looking for? Browse other questions tagged breweries or ask your own question.

12
Aside from the number of barrels they produce, what is the main difference between a craft brewery and a microbrewery?
4
Looking for local beers on the Canary Islands?
7
What are the differences between mead and beer? Where can I try one in the US?
2
Beer n Brewery Statistics - Any Sources for Production, Consumption, Number of Breweries, etc. per Country?
1
Is the country of origin for a beer always the same as the brewers country of origin?
0
What is the name of the Scottish Brewery that makes Nanny State beer?