Cause of seasonal difference in beer production

I was recently crunching some numbers about beer production in the United States (data from the Alcohol and Tobacco Tax and Trade Bureau), and I noticed pretty significant seasonality in the production of beer: 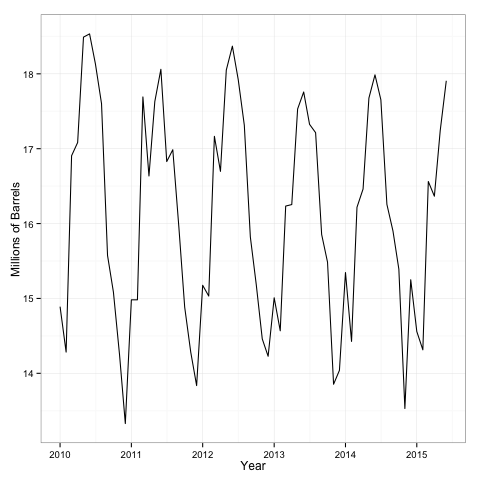 One thing you should take into consideration is that this chart certainly represents macro breweries production, once they still have the vast majority of the market-share, as opposite to craft breweries. So, we are talking here mainly about light lagers, known to be consumed as a refreshing beverage.

So, to me, it's pretty clear that the production increases as the weather warms up, peaking at the summer, and then falls down again towards chiller seasons. Considering distribution and other delaying factors, the peak at June would match the peak consumption at mid-July through mid-August.

PS: I don't live in USA, and this is merely a theory I came up with, but which seems feasible to me.

I think the answer you are looking for is not so much seasonal as it is holidays.

As you have your summer holiday in the middle of the year, it is the time when most alcohol is highest in demand.

The small spikes in your graph around December indicates the increase in production for new-year's parties.

As I am on the opposite side of the world, our peak production is the three months leading to December, for our Summer Holiday.

Not the answer you're looking for? Browse other questions tagged production or ask your own question.

12
Aside from the number of barrels they produce, what is the main difference between a craft brewery and a microbrewery?
8
What type of beer require the most time to produce?
3
Can a beer like Tuborg or Budweiser be made at home?