Porter in the Marketplace

Recently, I traveled to Denver, CO, and though I didn't go for beer-specific purposes, I took advantage of a few breweries (and taphouses) that were conveniently close to my hotel.

The one I was most excited about was Great Divide, mostly because I had discovered their Saint Bridget's Porter years beforehand. I did not keep track of this beer, however, and was disappointed to find that they no longer produced it.

The bartender informed me that this was because "porters don't do well in the marketplace."

Is this a common opinion among brewers? Could it just be regional to Denver? What might the reasoning be behind this?

TL;DR: Yes, but they're growing. 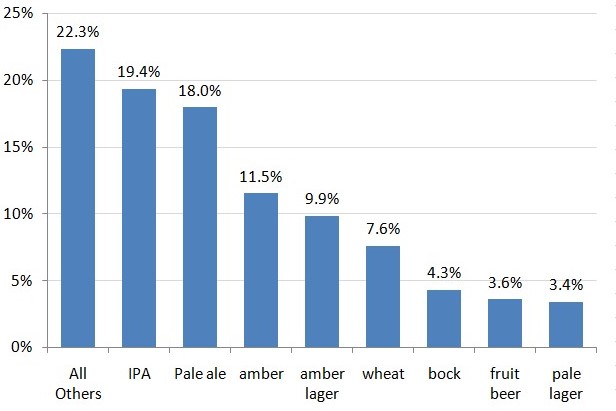 This chart shows, for craft beer sold in 2012, the relative portion of the market each style made up, with IPA being the most popular (a relatively new occurrence). Porters do not even show up. 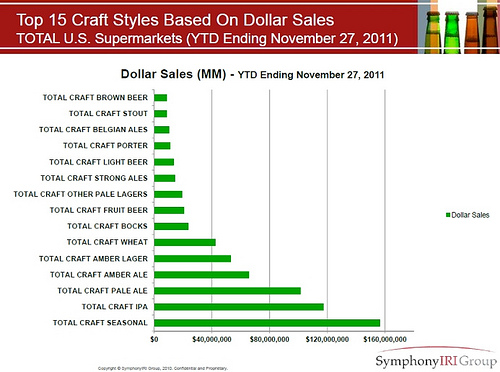 Here's another for 2011 showing porters as quite low on the list. 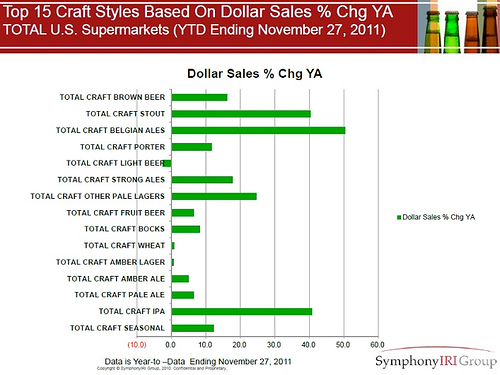 This chart shows the year-over-year increase in sales by style. You'll note here that, at least in 2011, porters weren't growing very fast either.

More recent data was a little hard to come by, but it seems that the overall sales numbers are unlikely to change that much in a couple years: IPAs, Pale ales, Ambers and Amber Lagers are probably still topping the charts. So it's not that porters don't sell at all, but they're certainly not top earners.

Drifting into conjecture, I would say that the people interested in 'big beers' will take a stout over a porter, and those interested in a more subtle beer will go for a brown or an amber, leaving porters in a bit of a no-man's-land in the middle.

Not the answer you're looking for? Browse other questions tagged breweries porter or ask your own question.

37
What's the difference between a porter and a stout?
9
Why is it called “porter”?
4
Looking for local beers on the Canary Islands?
7
What is the micronutritional value of stouts such as Guinness?
6
Is Heady Topper by The Alchemist worth it?
6
Microbrewery in Porto, Portugal? Port, Porter, Porto, Portugal?
6
Causes for regional differences in brewery count in the United States
1
Is the country of origin for a beer always the same as the brewers country of origin?
4
What is a dry porter?
4
What is the source of the plum flavor in (this) plum porter?