What's a good way to train your palate?

Everyone knows how to drink beer, but it seems like it's an acquired skill to be able to differentiate (and articulate) different flavors. Whereas someone just turning 21 might say "this beer tastes... dark", a more experienced drinker might describe it as "nutty and chocolatey, with mocha overtones and black currents in the aftertaste."

What are some good strategies for moving from the first quote to the second? That is to say, how does one train their palate for beer tasting?

I didn't know much about beers until I moved to San Diego, where I was introduced to beer flights: 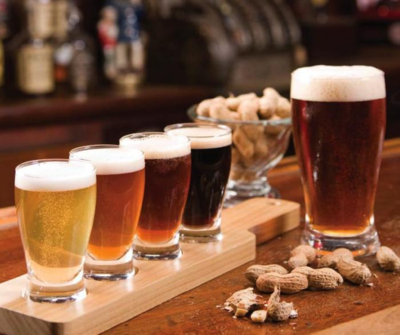 Somehow, I'd never heard of or seen them!

A flight is 4 or 5 small servings of beer, typically in 4.5- to 5-oz. glasses, usually served on a "paddle." At least in San Diego, a flight costs as much as a pint on draught, so often it's a no-brainer to get flights if you want to taste a variety of beers. When you order a flight, you of course get to choose what 4 or 5 beers you'd like to have. I often select similar beers—a set of stouts and porters—or a bunch of IPAs (and doubles)—so I can really get a chance to taste what distinguishes specific brands and subtypes.

When a friend of mine flew in from New York (also never having heard of flights), he was enthusiastic about getting two flights and sharing all 10—doing blind tests on one another. He went from saying, before we got to the bar, "All beer tastes the same to me—I can only taste dark or light," to, "Oh man, I didn't know I was even capable of tasting such little differences!"

So, beer flights are an effective yet casual and fun way to get yourself or anyone to appreciate the multifarious tastes of beers.

I think trying to start with all the ingredients, brewing processes, and the (dizzying) gamut of terminologies for all the subtle tastes, might be like teaching someone to drive by starting with the difference between torque and horsepower—they can't fully appreciate the meaning of words until they've experienced the sensations they describe. By contrasting beers side-by-side, we build an internal, as-of-yet-wordless "vocabulary" of tastes, e.g "This beer has more of... that thing, whatever it's called, than this one," and then we learn terminology (and ingredients and processes) as a means of filling those voids in words for senses we've experienced. Otherwise, we're storing abstract definitions, which we don't retain very well.

In a word, practice.

Most people drinking beer don't actually "taste" the beer properly. They just drink it. Of course, you do get some impression of the beer just from casual drinking, but it's not on the same level as if you are properly tasting it.

So, the first step to getting from the first quote to the second is learning how to taste the beer correctly and completely so that you can pick up all the nuances in the flavor and aroma. How to sample a beer properly? I think that's a good candidate for a new question!

It's easy to "just drink it". If you want to really pay attention to the beer, there's nothing better than forcing yourself to write it down. The format doesn't matter much, but I prefer a multi-part tasting form to force me to think about each part of the beer. For example, I usually break it down into 4 sections:

Tasting notes like this force you to really concentrate on the taste, which helps improve your palate. They're also nice because you now have a record of your thoughts on that beer to refer to later (maybe to compare to other beers of that style).

Not the answer you're looking for? Browse other questions tagged taste or ask your own question.

15
If you are having a beer tasting, what is a good way to clear the palate?
7
Is there any way that I can discern the IBU of a beer if the bewer doesn't provide that information?
6
Trying to Find a Good Beer for A Friend
4
What's responsible for the “metallic” taste in Belgian beers?
11
Is Guinness really different in Ireland, compared to what's sold in the US?
11
What alcohol would go good with tea?
8
What's a good (neutral) sample beer to spike with a sensory training kit?
1
What's the point of drinking light booze?
4
Is there a way quantify beer flavour characteristics?