How do I categorize Orval?

Orval has a very distinct taste, but I'm not quite sure how I should categorize it?

Orval is in a category of its own, it's not an amber or a blonde beer, it has a fresh flavor, but it's not a sour or fruit beer either. Generally it falls under the Belgian Pale Ales. 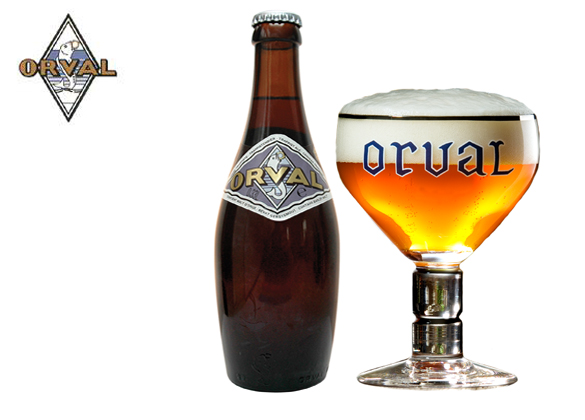 Orval has a very traditional and unique brewing process which involves the use of dry hopping, in which large meshed bags of hops infuse the beer during the three-week maturation period. The other is the use of Brettanomyces yeast during this same maturation, which are a local wild yeast. Hallertau, Styrian Goldings and French Strisselspalt hops are used. The beer is then matured at 15°C for a minimum of four weeks on site before being distributed.

If drunk right after bottling it has a "young" fresh flavor. The beer can be preserved for several years as it re-ferments once bottled. Even 35 year old Orval is still drinkable, if preserved at the right temperature. After about 1 year of preservation the beer flavor changes to a softer, sweeter and more intense experience compared to the young one.

There are two versions of Orval, one is the normal one which can be bought in the stores and then there is also a special Petite Orval, which can only be drunk at the Orval abbey and is only produced for the Monks (no mass sale). Its alcohol percentage is a lot lower than the normal Orval.

Orval is brewed primarily with pale malt (with some caramel malt) so it can most reasonably be classified as a Belgian Pale Ale.

Not the answer you're looking for? Browse other questions tagged trappist or ask your own question.

13
How do Trappists Brew so much?
6
What are abbey beers? How did they come about? Why do monks brew beer?
5
Why are Enkel trappist beers not sold publicly?
3
How to chill a 30cl bottle to “cellar” temperature?
10
Distinguishing features between Rochefort 10 and Westvleteren 12
6
How long in advance do you need to order Westvleteren?